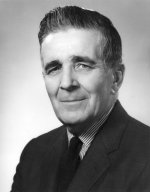 Nelson Jules Castonguay served as Chief Electoral Officer from 1949 to 1966, overseeing several significant advances in electoral law and administration. In 1955, an amendment to the Canada Elections Act removed discrimination on the basis of religion from electoral law. In that year voting by postal ballot became available to spouses of military personnel posted abroad.

In 1960, the Diefenbaker government extended the vote to all "registered Indians." Also that year, the right to vote in advance polls was made available to everyone who would be away from home on election day, not just those in certain occupations specified in the Act.