The objective of the transposition of votes process is to determine how the 2011 general election voting results are to be distributed among the new FEDs under the 2013 Representation Order. This section provides an overview of the methods used by Elections Canada to determine the registered parties' candidates who have the right to provide the returning officer with lists of qualified persons to be appointed as election officers for the first general election that will be held under the new Representation Order.

As the information available for transposition varies by type of poll (ordinary poll, advance poll or mobile poll) or voting method (Special Voting Rules), a slightly different approach was used for each type.

The geographic superimposition aims at establishing links between the four maps: the old and new FEDs, the set of PDs used at the 41st general election, and a map version of the list of electors.Footnote 3 This step consists of a series of cartographic overlays to determine how the PDs of the old FEDs are to be reassigned to the new FEDs. This process identifies not only the PDs that are moved in their entirety to one FED or another, but also those that are split by the new boundaries. These overlays also allow linking between the new FEDs and the electors' physical addresses.Footnote 4 At the end of the overlay process, each elector's physical address on the list of electors is precisely geo-located within a PD, as well as within old and new FEDs as shown in Figure 1 below. Therefore, the number of electors on that list can be counted for each new FED-PD piece.

Calculations of the ratios

After the old and new FEDs, PDs and electors have been linked, a ratio R can be calculated for each PD. Thus, R represents the proportion of electors assigned from that PD to a given new FED, for example F. It is obtained by E/T, where E is the number of electors in the PD assigned to F and T is the total number of electors in the PD. R varies between zero and one; R=0 means there are no electors assigned to the new FED and R=1 means all electors are assigned to the new FED. The calculation of R is performed at the PD level because voting results for ordinary polls are available at this geographical level. 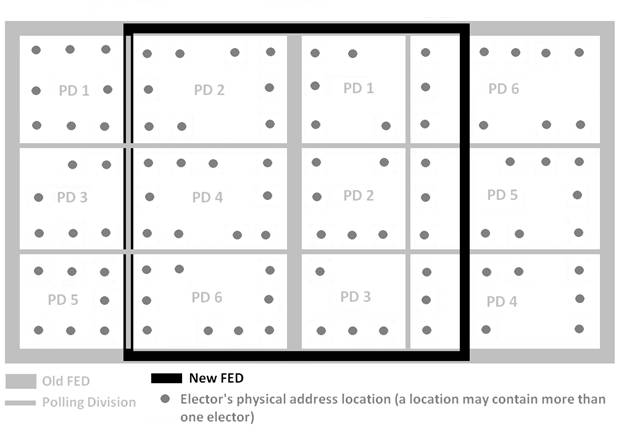 Votes transposed for each political party to each new FED

The steps described above are applied to the ordinary PDsFootnote 5. However, they are not directly applicable for the other types of polls, such as mobile polls and Special Voting Rules,Footnote 6 as the voting results are not available at the polling division level. The approaches used to transpose the number of votes for these types of polls differ slightly and are discussed hereafter.

A mobile poll is one staffed by a deputy returning officer and a poll clerk, who travel on election day from institution to institution where seniors or persons with disabilities reside, to take their votes. When a mobile poll is split by the new boundaries, the number of institutions on each side of the boundary is used to calculate a ratio that is applied to the votes collected at the mobile poll.

Special Voting Rules (SVR) votes are ballots cast by Canadian Forces, incarcerated and international electors, and national and local electors voting by mail or at a returning office. The number of SVR votes in the 41st general election was 279,355. Unlike the transposition of votes completed in 2003, the 2013 transposition of votes includes SVR votesFootnote 7. Including SVR votes will ensure that all votes are taken into account for the transposition and that the total number of votes transposed corresponds to the number of official ballots cast.

Unlike votes cast by ordinary ballots, SVR votes for the 41st general election are available only at the old FED level. Therefore, no information is available at the PD level. To transpose the SVR votes of the 41st general election to the new FEDs, the ratio calculated for each part of the old FEDs by using the transposed electors on lists (as defined in section 3.5 below) is applied to the SVR votes cast for each political party.

For Canadian Forces, incarcerated and international electors who cast ballots under the SVR, the same ratio used to transpose the SVR votes (as defined in section 3.4) is also used to derive the number of electors on lists for the new FEDs. National and local electors who cast ballots under the SVR are excluded from these calculations as they are already included in ordinary poll elector counts.

To determine the registered parties' candidates who have the right to provide the returning officer with lists of qualified persons to be appointed as election officers for the first general election that will be held under the 2013 Representation Order, the registered political parties (at the 41st general election) should first be ranked in each new FED. This ranking exercise is done after the votes for all types of PDs have been transposed. Candidates of political parties ranked first or second will have that right. These parties are those that counted the two highest numbers of votes transposed. In case of a tie, both parties are considered to be ranked in first and second places. In that event, they would appear in the relevant tables as Rank 1: Party A/Party B; and Rank 2: Party A/Party B.

The total population counts presented in this report are based on the 2011 Census of Population by Statistics Canada.

The reassignment allows for the transposition of all votes from the old to the new FEDs. The number of votes transposed for each officially registered party at the 41st general election is calculated using the following rules:

Different approaches were considered for transposing the results of the 41st general election.

Transposed votes were validated throughout all steps of the transposition processFootnote 9. Control measures were put in place to minimize errors, such as misclassification of addresses. Misclassification errors occur when an elector's physical address is located on the wrong side of a new FED boundary. This can occur for a number of reasons, such as the quality of the elector's address information and misalignment between some geographic layers.

Return to source of Footnote 2 In this document, the set of federal electoral districts in effect at the 41st general election are referred to as old FEDs.

Return to source of Footnote 3 A map version of the list of electors is a point layer; each point represents an electors physical address location with the number of electors for that address attached to it. The list was extracted from the National Register of Electors in September 2013.

Return to source of Footnote 4 As opposed to a mailing address.

Return to source of Footnote 6 In this document, Special Voting Rules are considered as a PD type.

Return to source of Footnote 7 For the 2003 transposition of votes, SVR votes were not transposed but were reported at the provincial level.

Return to source of Footnote 9 Elections Canada would like to thank Sander Post from the Social Survey Methods Division at Statistics Canada for providing comments on the methodology.