Aboriginal Candidates in the 2004 General Election

This article summarizes statistical information about Aboriginal candidates in the 2004 general election, as one aspect of the representation of Aboriginal people in Canada's political institutions. Since political parties are one of the main vehicles for political representation, the article analyzes all the self-identified Aboriginal candidates endorsed by each of the five parties that obtained the most support from electors, their electoral districts, their proportion of the vote and the success of their campaigns. The data and analysis suggest that more representation (numeric and substantive) of Aboriginal peoples in our electoral process is necessary.

The information in this article comes from various sources, including the Web sites of Statistics Canada, Elections Canada and the registered political parties, and information provided by representatives of each of the political parties discussed. The political parties included in the analysis are the Bloc Québécois (BQ), Conservative Party of Canada (Conservatives), Green Party of Canada (Greens), Liberal Party of Canada (Liberals), and the New Democratic Party (N.D.P.). The analysis does not include candidates from any party other than the five listed. Footnote 1 The information in this article relies heavily on the process of self-identification. Despite the inherent flaws in using self-identification as the only means of identifying Aboriginal candidates, it is the only means available at this time. Footnote 2 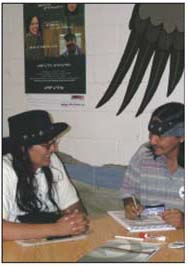 Aboriginal candidates in the 2004 election

How successful were they?

* Candidates identified in bold and italics were elected.

Candidacies compared to proportion of population

By gender and political party

The popular vote received by each successful Aboriginal candidate is also noteworthy. In the ridings where Aboriginal candidates were successful, five had a clear plurality of votes (i.e. at least 5% more votes than the next closest candidate). The exception was Western Arctic, which was the subject of a judicial recount. At first count, the difference between Blondin-Andrew and her closest opponent was only 52 votes. After a partial recount, the difference increased by one to 53 votes. Blondin-Andrew won the seat. Footnote 13

The flip side to the success of the six MPs mentioned above is the lack of electoral success for the other 21 candidates. Of particular interest here is the fact that although the N.D.P. ran nearly the same number of Aboriginal candidates as the Liberals, none of the Aboriginal N.D.P. candidates were elected. Moreover, voters did not elect any Aboriginal candidates in British Columbia, Alberta, Saskatchewan, Manitoba, New Brunswick, Nova Scotia, Prince Edward Island or Yukon. This is of particular concern given the very high proportion of Aboriginal people in Yukon, Manitoba and Saskatchewan, and the significant proportion of Aboriginal people in Alberta and British Columbia (see Table 2). 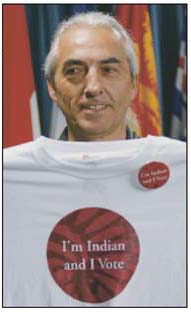 At an Ottawa news conference, Assembly of First Nations National Chief Phil Fontaine encouraged Aboriginal people to vote and estimated that they had sufficient numbers to be a deciding factor in 63 Canadian electoral districts.

Return to source of Footnote 1 The exception is the brief mention of Rick Laliberte, an Aboriginal candidate who ran as an independent in the electoral district of Churchill River.

Return to source of Footnote 2 See, for example, Drew Hayden Taylor, "How Native Is Native if You're Native?" and Bonita Lawrence, "Mixed-Race Urban Native People: Surviving a Legacy of Policies of Genocide," both in Ron Laliberte, Expressions in Canadian Native Studies (Saskatoon, Saskatchewan: University of Saskatchewan Extension Press, 2000).

Return to source of Footnote 5 Statistics Canada, "Age and Sex, 2001 Counts for Both Sexes, for Canada, Provinces and Territories  100% Data," www12.statcan.ca/english/census01/products/highlight/AgeSex/Page.cfm?Lang=E&Geo=PR&View=1&Code=0&Table=1a&StartRec=1&Sort=2&B1=Counts&B2=Both.

Return to source of Footnote 11 This suggestion  that the proportion of Aboriginal candidates from each province should closely resemble the proportion of the population that is Aboriginal  is premised on a particular model of representation, namely the numerical or pictorial approach. According to this view, "parliamentary institutions should be microcosms of the Canadian electorate, with the same balance of demographic characteristics found in the broader population" (see Keith Archer, Roger Gibbins, Rainer Knopff, Heather MacIvor and Leslie A. Pal, Parameters of Power: Canada's Political Institutions, 3rd ed. (Canada: Thomson, 2002), p. 194. There are, of course, other models of representation, including the partisan model (MPs are seen as representing their parties) and the territorial model (MPs are seen as representing a particular geographical area). In reality, every MP must juggle multiple representational demands. For Aboriginal people, ideal numerical representation in the House of Commons has tended to be difficult to achieve, largely because the Aboriginal population tends not to be geographically concentrated. For a discussion of the implications of this lack of "critical mass," see Kiera L. Ladner, "The Alienation of Nation: Understanding Aboriginal Electoral Participation," in Electoral Insight Vol. 5, No. 3 (November 2003), pp. 2126.