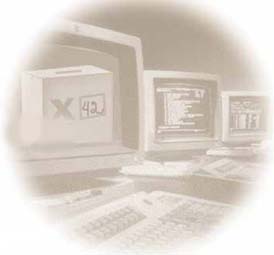 Canada's federal, provincial and territorial electoral agencies have signed an accord to develop a system for sharing Information Technology (IT) knowledge and resources. The accord is intended to encourage sharing of information and skills among the agencies and result in reducing the cost of administering elections in their various jurisdictions.

The concept for the system was first proposed by the Chief Electoral Officer of British Columbia, Harry Neufeld, in July 2003 at the Conference of Canadian Election Officials in St. John's, Newfoundland and Labrador. Given that electoral offices in Canada have many processes in common, similar legislative mandates, and similar budget restrictions on their IT resources, Neufeld proposed that sharing IT resources among agencies would benefit everyone concerned. Recognition of common concerns resulted in the creation of the Electoral Technology Accord (ETA), of which all the provincial and territorial agencies and Elections Canada are members.

A working group with representation from each participating jurisdiction was asked to create a white paper outlining possible areas of collaboration in which services, knowledge and resources could be shared. During the first half of 2004, IT representatives met to discuss and document current practices, operations and resources in use at their respective offices.

The meetings also documented examples of existing collaboration among jurisdictions in the areas of voters lists, hardware and software, and processes. It became clear that, in the long run, a common data model and a common understanding of differences across jurisdictions would make it possible to share computer applications and resources to the benefit of all members of the ETA.

The final white paper presented at the July 2004 Conference of Canadian Election Officials in Toronto identified several tasks that could be addressed by a formal Technology Accord Working Group during the subsequent 12 months. These tasks included adapting common standards for describing business areas, using these standards to document common electoral data models, recommending a management/communication methodology for the group, and identifying priorities for the 2005/2006 time frame.

In addition, the white paper established the principle that participation in any aspect of the ETA would be optional based on a jurisdiction's needs, abilities and return on investment at the time – but that all jurisdictions would be included when findings or reports were made.

The white paper was accepted and adopted by the chief electoral officers in November 2004 and the formal Working Group, with a technology representative from each participating jurisdiction, was established to address the proposed tasks.

Between October 2004 and May 2005, the group identified and documented how all jurisdictions collected and stored their voter, address, and electoral event data. From these three data sets, 48 database tables and more than 250 individual data fields were identified and incorporated. 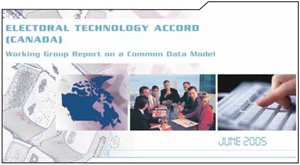 The group took an inclusive approach to creating its shared model. If even one jurisdiction needed a type of data, it was incorporated. The goal was to make sure no jurisdiction would have to change its processes to share in the common data model, but that when possible, due to system re-engineering or purchase, the shared model would be adopted. This adoption would ultimately result in cost savings, the data analysis and design having been shared among the jurisdictions.

In addition to the data models, the group established a formal change process for data models, shared research and development directions, and proposed communication methods and "next steps" centred on financial and geographic data modelling. All participants, whether from large or small offices, agreed that meeting to share knowledge had a huge benefit in itself – they were able to take back to their agencies new ideas, new directions and, in some cases, sound advice about what not to do.

A report on the completed data modelling work and proposed structure and future direction was presented at the July 2005 Conference of Canadian Election Officials in Whitehorse, Yukon. The data model was accepted as a shared resource for the accord participants to use in their operational plans where they could. Plans for the working group to add electoral finance and electoral geography to the common data model during the next 12 months were approved unanimously. In addition, the group agreed that sharing research, hardware and software, staff, and operational processes in the future would be a great asset to all electoral offices in Canada.