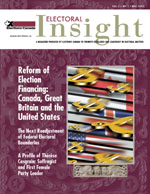 Note:  The opinions expressed are those of the authors; they do not necessarily reflect those of the Chief Electoral Officer of Canada.