3. Process for Counting Ballots During a Judicial Recount

This section describes the procedural steps related to recounting ballot boxes and envelopes. Sections 4 and 5 below provide guidance on examining ballots and dealing with disputed ballots.

The process for counting ballots and dealing with disputed ballots during a judicial recount is illustrated in Figure 1 below. References are to Schedule 4 of the Act. 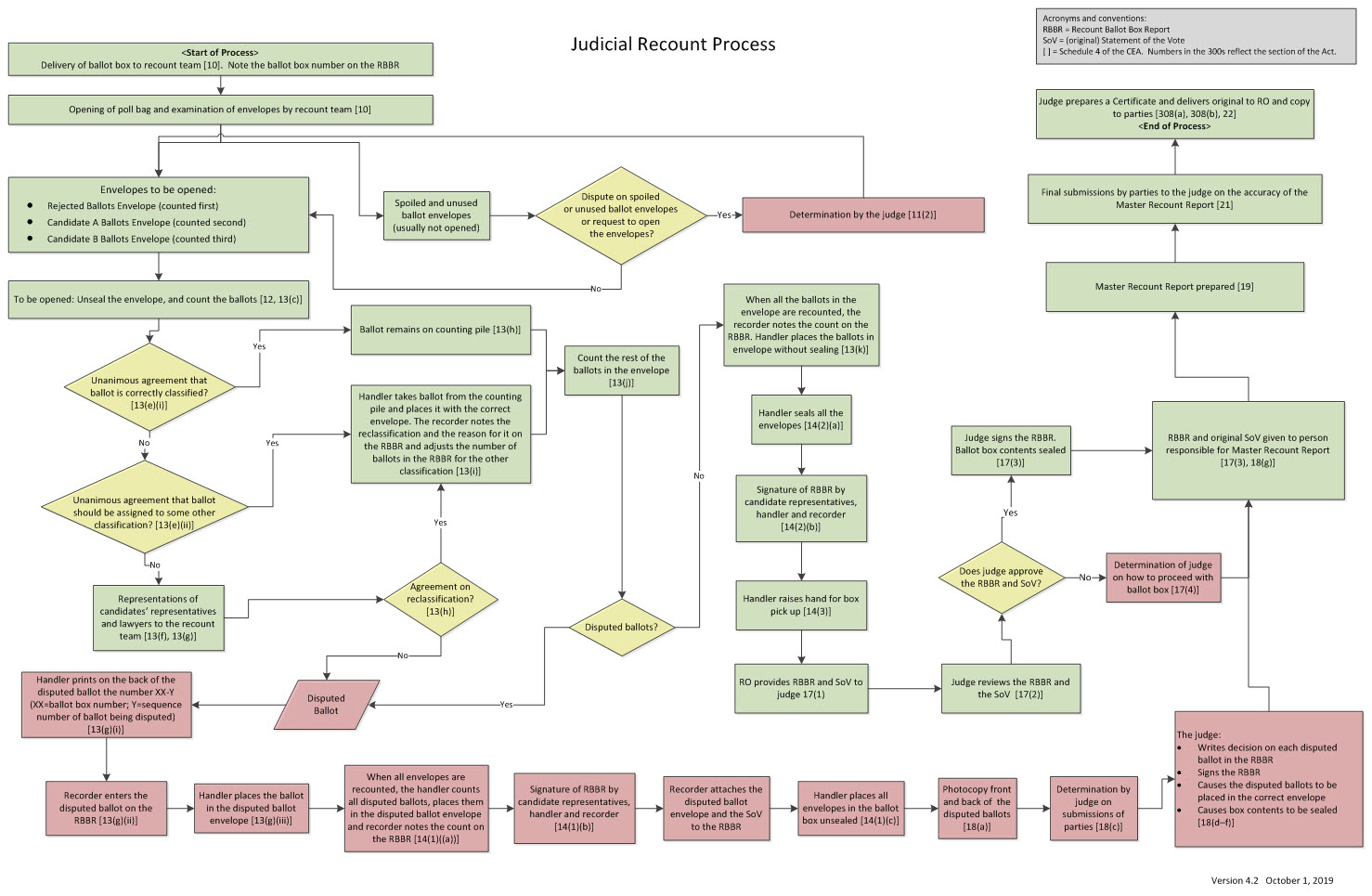 When a ballot box and the corresponding original Statement of the Vote are delivered to a recount team, the recorder must first note the number of the ballot box on the Recount Ballot Box Report. Then the handler must open the ballot box, remove and open the large envelope (known as the yellow poll bag) and remove from it the envelopes containing the ballots. [s. 10 of Sch. 4]

The recount team must examine the envelopes containing spoiled ballots and unused ballots without opening them. If there is any dispute concerning one of those envelopes or a request that one of them be opened, the question must be determined by the judge. [s. 11 of Sch. 4]

The recount team must recount first the ballots in the envelope containing the rejected ballots, if any, and then, envelope by envelope in alphabetical order of the candidates' names, the ballots that were classified as valid votes in favour of candidates. [s. 12 of Sch. 4] To facilitate the count, the recount team can use a Tally Sheet similar to the one used on election night and illustrated in Appendix D (Form 3).

3.2. Process for Each Envelope – Review of Ballots Correctly Classified or to Be Assigned to Some Other Classification

The recount of the ballots from each of the envelopes must be conducted in accordance with the following steps:

3.3. Steps in Returning the Ballot Box to the Judge

3.3.1 If There Are No Disputed Ballots

When all envelopes from the ballot box—except those containing spoiled and unused ballots—have been recounted, the handler must seal the envelope containing the rejected ballots, if any, and the envelopes for each candidate and place them in the ballot box. The seal is signed or initialled by the handler, the recorder and the candidates or their representatives. [s. 14(2)(a) of Sch. 4] The recorder shall:

The handler shall place the Recount Ballot Box Report, the original Statement of the Vote and the large envelope (poll bag) in the ballot box. [s. 14(2)(c) of Sch. 4]

When these steps are completed, the handler shall signal by raised hand that the recount team has completed its work with that ballot box. [s. 14(3) of Sch. 4]

3.3.2 Duties of the Returning Officer

The returning officer must provide the Recount Ballot Box Report and attached original Statement of the Vote to the judge. [s. 17(1) of Sch. 4]

The judge must review the Recount Ballot Box Report and Statement of the Vote and, if satisfied, initial the report to indicate his or her approval. [s. 17(2) of Sch. 4]

The returning officer must cause the sealed envelopes to be placed in the large envelope, the large envelope to be sealed and placed in the ballot box, the ballot box to be sealed and placed in a secure location designated for the ballot boxes for which the recount has been completed and the Recount Ballot Box Report and Statement of the Vote to be given to the person responsible for the preparation of the Master Recount Report. [s. 17(3) of Sch. 4] A copy of the Master Recount Report is included in Appendix E (Form 4) of this handbook.

In a 2015 judicial recount,footnote 22 a decision was taken for boxes with no disputed ballots to be sealed at the counting table rather than after the judge had approved the Recount Ballot Box Report. This freed up clerical assistants. [s. 23 of Sch. 4]

Return to source of Footnote 21 Schedule 4 of the Act does not specifically contemplate the involvement of the judge at this point. However, section 23 of Schedule 4 empowers the judge to alter the procedures after giving the parties and the returning officer the opportunity to make submissions. Therefore, a judge may wish to become involved as issues arise to be able to establish an early approach for certain types of disputed ballots.

Return to source of Footnote 22 The recount was held in the electoral district of Desnethé–Missinippi–Churchill River.