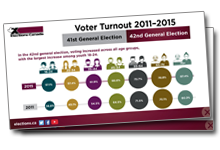 This table presents Elections Canada estimates of voter turnout by age group for the 2011 and 2015 federal general elections.

In the 2015 election, the participation of voters aged 18 to 24 increased by 18.3 percentage points to 57.1% (from 38.8% in 2011). This is the largest increase for this age group since Elections Canada began reporting demographic data on turnout in 2004. Within this age group, those eligible to vote for the first time cast their ballot at a slightly higher rate (58.3%) than those who had been eligible to vote in the previous election (55.1%).

Return to source of Footnote 1 Voters eligible to vote for the first time.

Return to source of Footnote 2 Voters between 18 and 24 years old who were eligible to vote in the previous election.

Data sources: Under the Chief Electoral Officer's authority, Elections Canada is using administrative data from the electoral process to obtain a random sample of electors who voted. By linking these data to the National Register of Electors, Elections Canada is able to produce estimates of voter turnout by age and sex.