Survey of Candidates of the 41st Federal General Election

This section explores candidates' perceptions of the appropriateness of online technology as it relates to voter participation, as well as suggestions for improving the conduct of future federal elections.

This section presents the results for the questions related to candidates attitudes toward online registration and voting.

Almost three-quarters (74%) of surveyed candidates think that electors should be able to register by using the Internet. Candidates were more divided over the use of Internet voting, with far fewer, 51%, expressing support for this method of voting. 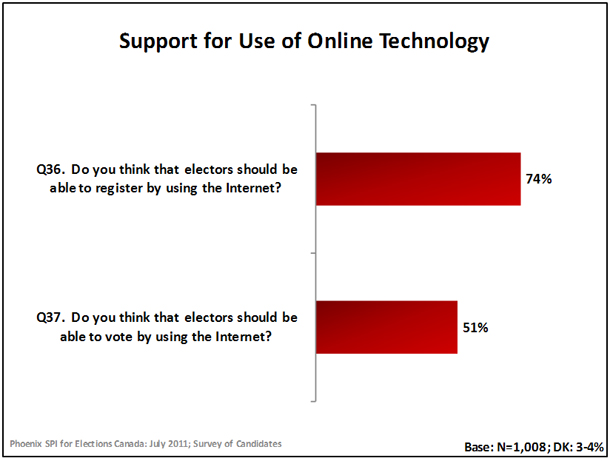 Text version of graph "Support for Use of Online Technology".

Candidates from Atlantic Canada (82%) and first-time candidates (79%) were more supportive of online elector registration. Support for Internet voting increased as respondents' number of candidacies decreased (from 38% of the most experienced candidates to 58% of first-time candidates) and was higher among non-elected candidates (54% vs. 37% of those elected) and candidates who were members of a party represented in the House of Commons (54% vs. 49% of independent candidates and 33% of members of non-HoC parties). Variations by age regarding support for online elector registration were small and not statistically significant. Online voting received the support of a majority of candidates under 30 (53%) and 50 and older (55%), compared to 47% of those 30-49 years of age.

Candidates offered numerous suggestions to improve the conduct of federal elections. However, no single suggestion clearly stands out given that none was offered by more than 10% of respondents. In fact, one-quarter of candidates offered no suggestions: 20% said they did not know how to improve the conduct of federal elections and 6% chose not to respond to the question. The range of suggestions offered for Elections Canada's consideration can be seen in the accompanying graph and are enumerated in the accompanying table. Suggestions have changed little since 2008, with the introduction of electronic methods of voting leading the list then as now. 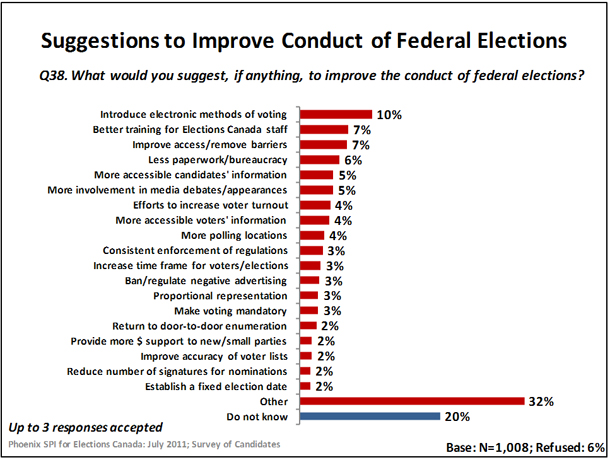 When the suggestions are grouped together, several themes emerge from the feedback: 1) voting or registration changes, 2) administrative suggestions, 3) communications aspects, and 4) regulatory changes.