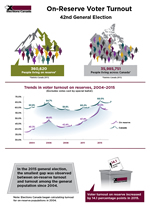 In the 2015 election, voter turnout for registered electors living on reserves was 61.5%. This number is obtained from votes cast on reserves during advance voting days and election day. It excludes votes cast by special ballot.*

Elections Canada does not capture demographic information at the polls; therefore, data on participation does not include all Aboriginal voters. The study is limited to a population of 360,620 electors living on reserves, about 10% of whom are not of Aboriginal descent. Statistics Canada estimates that 1.4 million Canadians are of Aboriginal descent.

Text description of "Trend in voter turnout on reserves"

Return to source of Notes: