In the 2015 general election, the smallest gap was observed between on-reserve turnout and turnout among the general population since 2004.

Voter turnout on reserve increased by 14.1 percentage points in 2015.

Note: No on-reserve communities have been identified in Nunavut.

#DYK? Approximately 10% of the populations who live on reserves are not of indigenous descent.

#DYK? On-reserve polling divisions are those completely or partially contained within an on-reserve community (one that is legally affiliated with a First Nations or Indian band).

Alberta had the highest increase in on-reserve voter turnout in 2015.

Alberta has 48,585 people living on reserve. 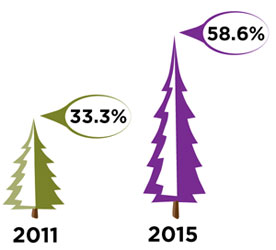