10. Identification at the Poll

Virtually all voters (99%) had the required identification documents with them when they went to vote, a proportion essentially identical to both the 2008 (98%) and 2011 (99%) general elections.

Electors could prove their identity and address by using the following combinations of documents:

Ninety-three percent (93%) of voters used option 1, and three percent (3%) used option 2 (Figure 10.1). Options 3 was rarely used; fewer than one percent of surveyed voters indicating that they relied on this option. According to the data collected, the remaining four percent (4%) of voters either didn't remember or mentioned an invalid combination of identification documents. Significant differences were observed for Aboriginal electors and electors with a disability.

Base: Voters who had the required identification documents when they voted.

While the VIC was not an acceptable proof of identity and residence, eleven percent (11%) indicated that they used their VIC.Footnote 36 However, of those most (90%) indicated having proven their identification using one of the three options.

These results are quite similar to what was observed in the 2011 elector survey, following the same order in terms of most-used documents to prove identity and address. The vast majority (90%) of electors said they use their driver's licence. The other types of documents mentioned in the 2011 survey were a health card (16%), the voter information card (14%), a Canadian passport (6%) or a utility bill (4%). When compared with the 2008 elector survey, the only significant difference is the proportion of electors who used the VIC (3%), which fell from third to fourth rank in most-used documents to prove identity and address.

Notes:
1) Answers with 1% or less were excluded from this table.
2) The VIC was not accepted as a piece of identification in 2015.

The identification provided did differ significantly between socio-demographic groups:

Overall, almost all (99%) voters felt that meeting the identification requirements was a simple process, with ninety-two percent (92%) of respondents indicating that it was very easy and seven percent (7%) indicating that it was somewhat easy to meet the requirements.Footnote 37 There are no significant differences among subgroups (Figure 10.2). Compared with the 2011 and 2008 general elections, there is a decrease in the perception of the ease with which voters could meet the identification requirement (97% and 98%, respectively).

Figure 10.2: Perceived Ease with Which Electors Were Able to Meet the Identification Requirements 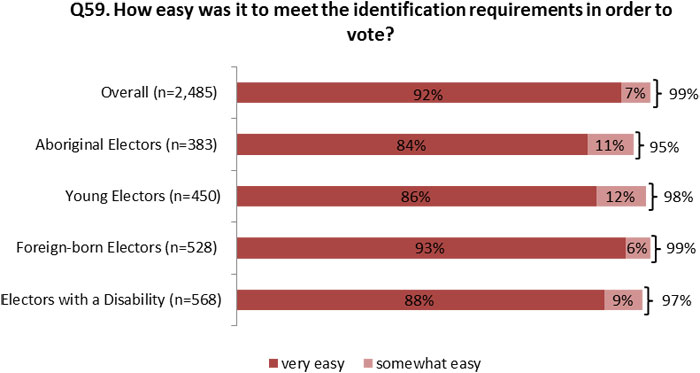