For the 2004 federal election, the bivariate relationships between a number of independent variables and mean reported levels of turnout among Aboriginal electors are demonstrated below (see Figure 1). The survey estimates an average turnout rate in this election of 60.4% among Aboriginal respondents.Footnote 6 When this is broken down, we find self-reported turnout rates of 55.9% among First Nations respondents, 72.7% among Inuit respondents and 68.4% among Métis respondents.

Each line in the figure represents one variable, while two points represent the average turnout rate for respondents according to their classification on the variable. The difference between these two points is the gap in turnout attributable to this variable. The graph organizes the variables according to the size of this gap, with the largest gaps at the top and the smallest at the bottom.

Beginning at the top of the graph, the largest difference in turnout exists between those who have or lack political resources, which we calculate by combining measures of political attention, knowledge and interest whenever available.Footnote 7 The results suggest that such resources have large effects, as those with more resources report voting at a higher rate (78%) than those who lack political resources (38%).Footnote 8 The next largest effect is attributable to the belief that voting is a duty. We also find that those who believe their vote does not matter are measurably less likely to vote. These variables, which can be classified as measures of political belief or engagement, are then followed by a suite of demographic variables.

The next two largest effects are attributable to beliefs about the political system. Among those who believe that there should be a guaranteed number of Aboriginals in Parliament, reported turnout is lower. Those who say they would be more likely to vote if there were more Aboriginal candidates likewise report lower current voter turnout. Both of these findings suggest that at least some Aboriginal electors do not vote because of a dearth of sufficiently representative or similar candidates. We also find lower turnout among those who believe that parties do not address important issues.

Additionally, our analysis shows that geography matters: those who live in rural areas reported lower turnout in 2004. A sense of belonging matters as well: those with a higher sense of Canadian belonging and/or a higher sense of provincial belonging are more likely to have reported voting in the federal election. In keeping with earlier findings, feeling that one is part of a larger community is a sufficient condition for casting a ballot. We note, however, that having a sense of Aboriginal belonging has a statistically insignificant effect on the decision to vote. Likewise, near the bottom of the graph, gender is shown to be unrelated to voting, as is exposure to an Elections Canada ad. Similarly, believing that issues are too complicated has no effect on the turnout decision. 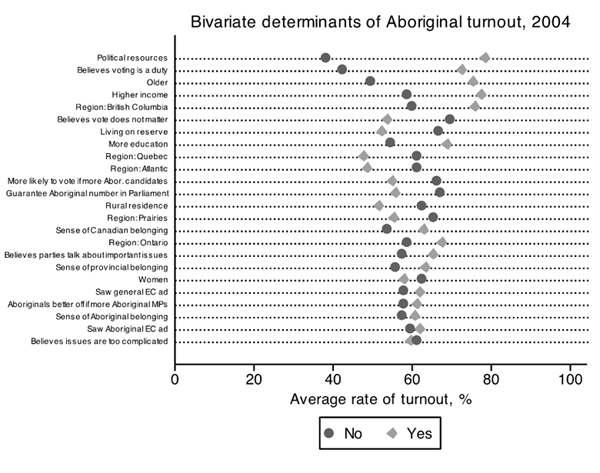 For the 2006 federal election, the survey estimates an average turnout rate of 69.8% among Aboriginal respondents. When this is broken down, we find self-reported turnout rates of 65.2% among First Nations respondents, 77.1% among Inuit respondents and 75% among Métis respondents.

The determinants of turnout in 2006 (see Figure 2) appear very similar to those in 2004. There is a striking effect for the belief that political parties are too influenced by those with money.Footnote 9 The average turnout rate of those who agree with this sentiment is 55 percentage points lower than those who disagree. Four other attitudinal variables round out the top 10 predictors. Once again, political resources and the belief that voting is a duty exercise large effects. So do the beliefs that more Aboriginals should vote to promote their own views and that low turnout weakens democracy. We also find that turnout is measurably higher among those who are members of a political party. 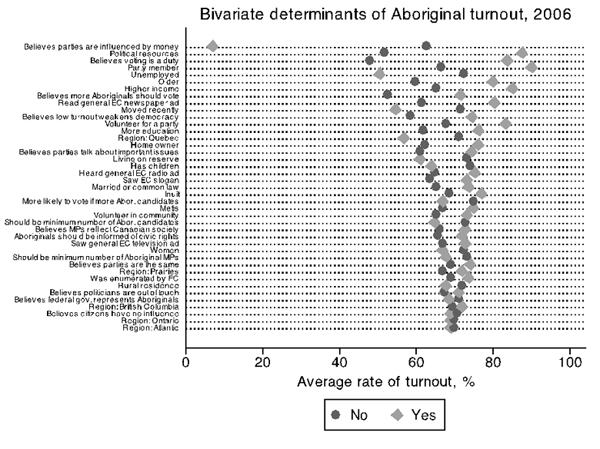 The only demographic variables that begin to rival these are age, income and education, which once again exercise large effects. Being unemployed or having moved in the last year are negative predictors of electoral participation, while home ownership is a positive predictor. Other significant bivariate predictors of turnout are residence in Quebec (which has a negative effect in 2006), parenthood, being married or living common law, and residence on a reserve (which again depresses turnout).

The remaining significant variables that increase turnout are: disagreement with the statement that one would be more likely to vote if there were more Aboriginal candidates; agreement that parties talk about important issues; disagreement with there being a minimum number of Aboriginal candidates; and self-reported exposure to Elections Canada's newspaper ads, radio ads or slogan. Finally, community volunteerism is associated with an increased level of turnout.

For the 2008 federal election, the survey estimates an average turnout rate of 54.2% among Aboriginal respondents. When this is broken down, we find self-reported turnout rates of 50.1% among First Nations respondents, 57.1% among Inuit respondents and 67.3% among Métis respondents.

The results from the 2008 election (see Figure 3) largely resemble those from the previous two elections. The largest gap is predicted by living in a household in which others also voted, confirming a well-known empirical regularity in political science (Nickerson 2008). Once again, we find that political resources and the belief that voting is a duty exercise very large effects on turnout, followed closely by a belief that parties talk about important issues and that low turnout weakens democracy.

These four attitudinal variables are accompanied by eight demographic predictors. Unemployment, living on a reserve, and having moved in the last year all depress turnout. Meanwhile, being older and identifying as Métis are associated with higher turnout. Likewise, cell phone ownership, a higher income and more education are linked to greater turnout.

While the difference in turnout attributable to residence in Quebec is large, it is not statistically significant. Living in a rural area, however, does predict lower turnout. We find that membership in a political party predicts higher turnout. Finally, those who report receiving an Elections Canada flyer are more likely to have reported voting. 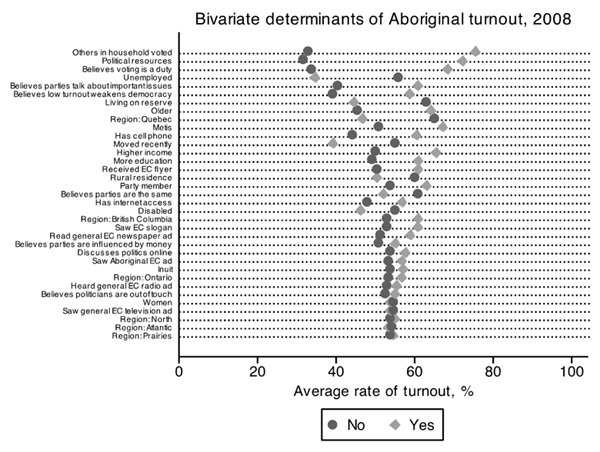 In the most recent federal election, the survey estimates an average turnout rate of 65.9% among Aboriginal respondents. When broken down by subgroups, we find self-reported turnout rates of 62.3% among First Nations respondents, 66.7% among Inuit respondents and 73.2% among Métis respondents.

The results from the 2011 election (see Figure 4) tell a similar story to the other elections. Once again, political resources exercise a significantly large effect. An expressed connection to one's community, which is likely exercising a substantively similar effect to that of living in a house where others voted, predicts a large difference in the rate of participation. We find that older respondents are more likely to vote, while unemployed respondents are less likely to vote. Those with more education and those who volunteer in the community are also more inclined to turn out. Likewise, higher income is correlated with greater participation. Internet access predicts higher turnout, as does identifying as Métis. While some geographic factors appear to matter (i.e. living on a reserve, in Quebec or in the NorthFootnote 10), they do not reach conventional levels of statistical significance. 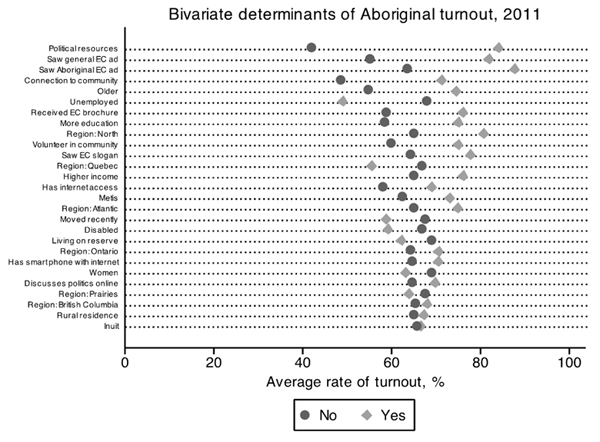 In the bivariate analyses above, three common findings are of note. First, political resources and a sense of civic duty both consistently exercise large effects on the decision to vote among Aboriginal Canadians. In this regard, Aboriginal electors do not differ noticeably from their non-Aboriginal counterparts, for whom these variables have long been identified among the most influential predictors in most accounts of turnout. Returning to our theoretical account of turnout, political resources are likely related strongly to turnout because they have an effect across several parts of the decision to vote. Those with greater resources will find elections less costly, as the cognitive costs of calculating the differences in policies between parties, of making a decision and of figuring out how to vote will be lower. Moreover, the cognitive benefits experienced in voting are higher among those who are more resourceful. Likewise, those who have a higher sense of civic duty will feel more obligated to vote.

Second, the same suite of demographic predictors that explain non-Aboriginal turnout, especially age, income and education, explain the turnout of Aboriginals. Theoretically, these variables increase turnout by increasing the benefits of voting, as older electors will arguably have more materially at stake in elections. Moreover, those who are older (to a certain limit), wealthier and more educated will find the costs of voting lower than those without the material resources to get to the polls.

Finally, a belief that parties address important issues in campaigns  which is another way of saying that elections and politics matter  also consistently drives a large gap in turnout. This directly relates to the benefits factor in the turnout calculus. The greater the belief of individual electors that parties will address issues which matter to them, the greater the benefits for themselves and others electors expect from voting.

Return to source of Footnote 6 It is common for voter turnout to be overestimated in survey self-reports.

Return to source of Footnote 8 For ease of interpretation, all of our bivariate analyses are based on dichotomous transformations of the independent variable. Where the variable is categorical or continuous, we use a median split.

Return to source of Footnote 9 This belief was only measured for the 2006 election.

Return to source of Footnote 10 In this paper, we use the term "the North" to refer to Canada's three northern territories.