The Roundtable on Youth Voter Engagement took place on June 5, 2012 at the Lord Elgin Hotel in Ottawa.

In opening the dialogue, the co-chairs discussed the complex nature of declining youth voter turnout and emphasized the need to forge a common approach among multiple sectors to address the issue. This challenge is not the sole responsibly of election management bodies. All Canadians have a stake in this issue, and a need exists for a pan-Canadian initiative to address declining youth civic engagement.

Voter turnout has steadily declined in Canada over the past two decades at all levels of government. Those who dont vote in the first few elections when they are eligible to exercise their democratic franchise are less likely to become voters later in life. With overall turnout at record low levels, and youth turnout between 34% and 39%, the compounding effects of declining youth turnout will likely have lasting impacts. At this rate, Canada may soon find itself in a situation where less than half of eligible electors bother to cast ballots. This poses serious challenges to the integrity of our democratic system in the long-term.

This decline in turnout is not a simple problem and those convened for this roundtable agreed that there are no quick fixes. However, participants were encouraged to make use of the diversity of representation and opinion assembled for this session to propose constructive ideas that may form part of a larger strategy to address this issue. Throughout the dialogue participants put forward ideas for discussion and consideration by the full group. The summary of these individual ideas and group discussions forms this roundtable report.

Objective: Develop a collective understanding of the issue of declining civic engagement among young Canadians

Voter turnout is declining at many levels, and while each demographic group demonstrates its own trends, the low and steadily deteriorating level of youth voter turnout is of paramount concern. Continued decline in turnout will pose challenges to the legitimacy of our elected legislatures, and further undermine the extent to which citizens feel their voices are reflected in government. Thus, the need for action to address this issue is pressing. But taking action, particularly on youth voter turnout, requires better knowledge of how young Canadians view civic participation, and the broader social context in which they live their lives. Dr. Diane Pacom of the University of Ottawa led the morning dialogue among participants, during which key points relating to the societal context of young Canadians were discussed.

As we seek to understand the factors affecting youth voter turnout, several participants underscored the importance of understanding the definition of "youth". As the traditional benchmarks associated with adulthood have increasingly been delayed (e.g. marriage, end of education, homeownership, etc.), the concept of youth has become more encompassing. At the same time, youth are highly fragmented and their identities, and how others perceive them, are in a state of flux.

As we further our understanding of the target demographic, we must then ask: what is driving the disengagement of youth from voting? Two issues were presented which could be contributing to this disengagement  the need for what might be called "virtue" in democracy, and a redefinition of citizenship among younger citizens. 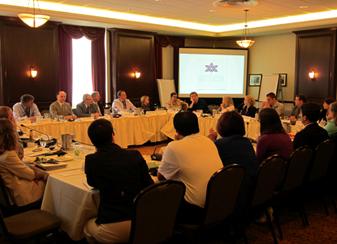 The virtue needed in our democracy, some participants suggested, is linked to the trust youth have in our system of governance. For young Canadians today, this trust is simply lacking. In some segments of the youth population, inattention by political leaders to key issues has undermined trust in existing government institutions. As one participant put it, youth are effectively "dropping out" as they lose interest in a political system that has increasingly become irrelevant to them. However, some noted that the trust issue may not be unique to youth, and that combinations of factors may more prominently contribute to their lack of desire to vote. Some participants opined that young Canadians often lack access to the entire system; not simply to the polls on election day. They questioned if institutions don't offer youth tools to meaningfully participate in governance, why should youth reciprocate by playing active roles in institutions? In addition, the foundation of citizenship is different for many young Canadians. In a constantly evolving social landscape, traditional conceptions of citizenship are changing and youth are less inclined to see voting as a civic duty.

These issues generally fall under the banner of what some have termed "motivational barriers". These affect the willingness of individuals to vote, as opposed to their actual ability to vote.Footnote 1

Building upon the morning discussion, and combined with the results of a pre-event survey of participants, three principal areas for discussion were identified for the afternoon working groups: 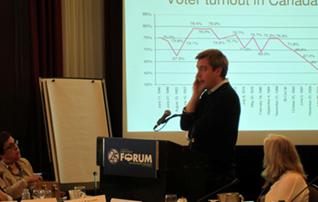 Over a working lunch, participants had the opportunity to explore public engagement processes, and to discuss new modes of working with citizens to increase their involvement in democratic political life. Peter MacLeod of the public engagement firm MASS LBP led the discussion. Key points raised, which helped spark ideas for consideration during the afternoon discussion, included the need to build the overall level of "democratic fitness" among citizens, and youth in particular. Providing opportunities for learning is essential, as is emphasizing the importance of finding more points of interaction to enable youth to influence government at all levels, and as such, "touch the state."

A possible avenue for action is to leverage public events to create new opportunities for engagement; for example, the 150th anniversary of Confederation in 2017. Drawing inspiration from similar work during Canada's Centennial Celebrations in 1967, the 150th anniversary could build upon a sense of attachment to our country through rejuvenated public engagement efforts.

In the discussion that followed, many participants reiterated the need to reinvigorate civic life by finding ways to make politics more relevant. Several participants noted that political parties and elected officials need to do more to engage with youth.

Objective: Agree upon actions that can be undertaken collectively (or individually) to address the issue.

For each of the three issue areas decided upon, a working group was struck to discuss and propose actions that can be taken to lead change and help engage young Canadians.

Members of this working group noted that the so-called 'hard-to-reach' is not a homogeneous group. It includes many groups within society such as: the unemployed, on and off-reserve Aboriginal youth, rural youth, and newcomers to Canada, to name only a few.

Reaching these groups will require different strategies, and it will be important to track the outcomes within each subset.

For Aboriginal youth, it would be beneficial to blend traditional education with civic education, so that historical knowledge can be employed to support new forms of civic engagement. Voting accessibility could be enhanced for this demographic by having polling stations in areas that are more accessible and familiar for aboriginal youth, such as Friendship Centres.

Across other hard-to-reach groups, numerous proposals were put forward that could form part of a broad-based effort to boost engagement. Ideas include:

Such ideas are intended to close the distance between the electoral process and hard-to-reach youth. The goal is for engaged leaders to work with young Canadians, bringing the election to them  hence the objective: Bring the Election to You(th) 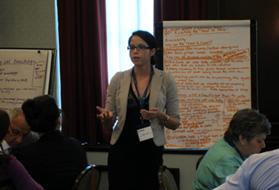 The exchange in this group focussed on three questions:

Political knowledge, it was agreed, includes knowledge of institutions, knowledge of the electoral process and how to participate, experiential knowledge based upon past participation (including negative perceptions), and issue-based knowledge.

Members of the working group noted that efforts to increase political and broader civic knowledge should target voters, but also age groups that are still engaged in formal education (K  12). Given the limited time for discussion, the working group focussed on the age groups still in formal education, and proposed ideas that can largely be integrated into classroom learning.

Based upon the group's discussion, potential areas for action to increase civic knowledge include: 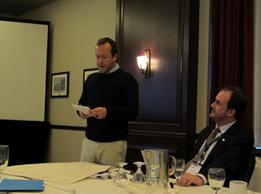 
Working Group 3: making politics and participation relevant and the norm

Youth who do not vote should not be written off as completely disengaged. Rather, this should be taken as a sign that they do not see voting as relevant, or the best way to make an impact. Indeed, all citizens need to feel the efficacy of participating in the electoral process.

Our system of governance needs to change to better reflect the people it represents. Young Canadians, students in particular, should be actively involved in guiding this reform, and should take part in its actualization. More research and better awareness is required to help launch such a change, and election management bodies should help with this cause.


Potential areas for action include:

Return to source of Footnote 1 See Appendix C for the pre-session background paper offering research on these issues.