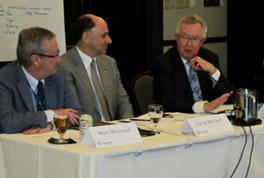 The Rt. Hon. Joe Clark provides his
reflections during the afternoon discussion

Following presentations by the working groups, participants re-convened in a plenary discussion to explore some of the proposed actions. Led by comments and observations by the Rt. Hon Joe Clark, former Prime Minister of Canada, the final discussion of the day focussed on the priority considerations for increasing youth voter turnout.

First, it was suggested that we must look at youth who do vote. What motivates them to participate? The importance of careful examination of existing research into these groups was underscored, as was the need to conduct further research into the diverse cohorts of the youth demographic to learn where action can have the most impact, and how results can be adequately measured.

Second, social media and technology must be seen as key avenues through which to engage youth. A paramount consideration will be how established institutions can better employ social media and new technologies. These communications platforms are not being used effectively today; this can and must be addressed

Finally, as had been mentioned repeatedly throughout the day's discussion, we need to explore the political system itself. We must understand what legislators actually perceive as the challenge, and how it relates to their work. Some argued that the evolution of political parties in Canada has caused us to lose the cohesiveness and common interest in politics that once existed. We need to know how we can effectively re-engage youth  and political parties  in a new environment.

Closing Remarks: Next Steps in the Development of a Collaborative Approach

Many potential action areas emerged from the day's discussion. Some are very clearly within the scope of election management bodies, such as new polling centre locations and more effective registration processes. However, the overall tone of the roundtable strongly suggested the need for collaboration across all sectors of Canadian society, with shared responsibility and accountability for engaging youth in our system of democratic governance.

The roundtable discussion provided greater clarity on the complex issues linked to declining youth voter turnout. These issues pose significant challenges, and we must remind ourselves that there will be no quick fixes. However, working collaboratively in effective partnerships, there is potential to make a real impact.

A key issue that must be addressed is the need to bring elected representatives into the equation. Throughout the day, participants opined that getting young Canadians engaged will be exceedingly difficult if the perception exists that system in which we want them to participate is not well attuned to their concerns. This was the so-called "elephant in the room." While issues like civic education and outreach are of high importance, upfront engagement to bridge the gap between young Canadians and political leaders, (e.g. parliamentarians and other elected officials) was noted to be an important first step. We must also work to bring political representatives into the discussion so that we can find ways to improve youth engagement. This is in everyone's interest in the short and long-term.

Following the roundtable, each participant was sent a short questionnaire to provide feedback on the event and the potential for further collaboration. Participants were asked what form additional collaborations could take, and what role they saw for their own organization in developing a collaborative approach towards addressing declining youth voter turnout.

Overall, participants were quite positive about what was accomplished during the roundtable discussion. Most agreed that some form of further collaboration was desirable. One participant put the matter succinctly: "The most important outcome was starting the conversation, but if we want to succeed, it can't be the end point." Those already working on the issue noted that they would continue to do so, while others indicated that they intended to focus more on youth voter engagement within their existing programs and activities.

Other participants noted some of the challenges associated with developing a collaborative approach, such as resource constraints and the risk of trying to "reinvent the wheel" by failing to take into consideration what we already know about the problem. Although such challenges are not insurmountable, they do remind us of the need to be realistic about what we can accomplish, and that collaborative action must be grounded in enhancing our understanding of the nature of declining youth voter turnout through ongoing research.

More concretely, participants expressed support for a number of follow-up actions, including the creation of a civic education working group to coordinate individual efforts and establishment of an online forum to exchange information. Other proposals included meeting again to continue the work of the roundtable, and possibly creating working groups dedicated to key themes raised during the course of the roundtable, such as the concept of "democratic fitness."

Elections Canada and the Public Policy Forum remain committed to future partnership with the participants of the roundtable. Contact among all parties involved has been ongoing since the session, and will continue. As we begin to develop a more collaborative approach that includes all sectors of society, the ideas discussed during the roundtable suggest key priority areas and actions that might be undertaken both collectively and individually. Elections Canada and the Public Policy Forum would like to thank all of those who participated in the roundtable and provided their invaluable feedback as an important first step in this direction.