5. Why is youth turnout so low?

The final and most important question to address concerns the causes of this declining turnout among youth. We should say at the outset that we do not know a lot about these causes. This should not be surprising. The turnout decline is a long-term phenomenon; there are good reasons to think that it is a complex pattern with a combination of causes. Some of the data that would be needed to uncover the root causes are simply not available. Most crucially, the CES does not contain a stable set of attitude questions that would allow us to determine whether the most recent cohorts feel differently about politics and elections from previous cohorts, at the same age.

At the same time, we know quite a few things about the phenomenon and what we know allows us at the very least to rule out certain interpretations. The first point to make is that this trend is not unique to Canada. There is clear evidence that youth are less prone to vote now than in the past and that this is the main source of overall turnout decline in other countries as well: the United States (Dalton 2007; Lyons and Alexander 2000; Miller and Shanks 1996; Wattenberg 2007), Britain (Clarke et al. 2004) and Finland (Wass 2007). This suggests that the causes of youth electoral disengagement are not specific to the Canadian context. We should be looking for reasons that could apply to many other countries.

The most striking change in the Canadian electoral context has been the shift from a system with two major parties plus a minor one (the New Democratic Party) to a multiparty system, with now four parties represented in Parliament and five parties receiving at least 5% of the vote. It is indeed paradoxical that turnout has declined in Canada precisely at the time when the range of choice offered to voters has been increasing. But it would be erroneous to see any causal relationship between these two phenomena. Britain has witnessed the same decline in turnout while maintaining its traditional party system.

Another aspect of the electoral context that has been shown to affect turnout is competitiveness. The more competitive the election is perceived to be, the greater the incentive to vote and the higher the turnout (Franklin 2004). This raises the question of whether elections have become less competitive over time in Canada (and elsewhere). The answer is negative. In fact, if anything, the winner's margin of victory has slightly declined over time in most democracies (Franklin 2004, 187). In Canada, as can be seen in Figure 1, there is no clear trend in margin of victory, defined as the vote gap between the first-placed party and the second. In fact, the mean vote margin in the last four elections (9.8 points) is slightly lower than the average for the 17 elections held from 1945 to 1997 (12.2 points). To the extent that there is a trend, elections appear slightly more competitive now. 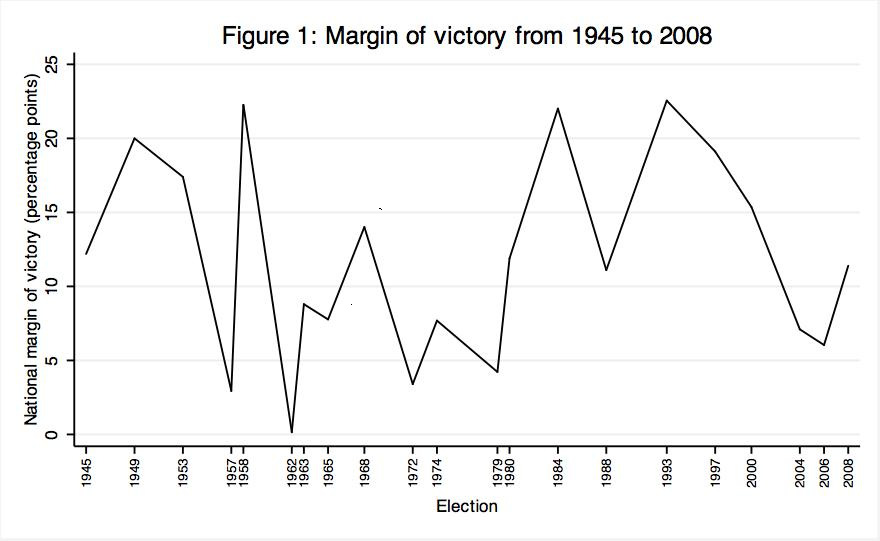 Still another possibility is that elections have become less meaningful over time. Two variants of this thesis have been advanced. The first concerns the impact of globalization. The argument is that as the world economy has become more global, there is not much that national governments can do, and they become more or less irrelevant. That argument is difficult to evaluate rigorously and the empirical evidence of the impact of globalization is far from conclusive (Boix 1998). Recently, Vowles (2008) used data covering 40 countries and 72 elections to see whether the propensity to think that those in power cannot make a difference is higher in countries that are more integrated into the global economy, and he found no such relationship. There remains the possibility that such a relationship emerges only among youth. This would require further research.

There is also the possibility that elections do not matter much anymore because party differences have been gradually waning over time. There has been much talk, for instance, of a new rapprochement between the left and the right (see Noël and Thérien 2008, chapter 7). Yet, "systematic studies of party programs in Western democracies between the Second World War and the end of the 20th century show the remarkable stability of the left–right division over time and across space" (Noël and Thérien 2008, 196). It is particularly difficult to believe that partisan differences have declined in Canada – given that the Canadian party system was traditionally described in the 1960s and 1970s as being based on pragmatic brokerage politics (Carty et al. 2000) and that the new parties that have emerged since, the Bloc québécois and the Reform Party in the 1990s and the Green Party more recently, could hardly be construed as "centrist".

Still another possibility is that changes in the way election campaigns are run may be partly responsible for the turnout decline. Some studies have shown that traditional door-to-door canvassing has a powerful impact on turnout (Carty and Eagles 2006; Green et al. 2003; Pattie et al. 1994). There is some evidence that direct candidate contact with voters has been decreasing over time, as parties have devoted more attention to the media (Denver et al. 2003). This shift may have contributed to lower turnout, although it is not clear why this should have affected the youth more than older people.

In the same vein, lower turnout may have been facilitated by the increasing negativism of election campaigning. But here again the connection is dubious. On the one hand, we are not aware of any study that has rigorously documented this more negative trend. On the other hand, and most importantly, the link between negative campaigns and low turnout is far from obvious (for conflicting findings and conclusions, see Ansolabehere et al. 1999; Geer 2006; Lau and Pomper 2001). Finally, even if there is a connection, we would have to explain why negative ads seem to depress turnout only among the youth.

There is thus no clear evidence that the decline in youth turnout can be imputed to changes in the electoral context. The most plausible hypothesis is therefore that youth turnout is declining because of changes that have occurred among young citizens. The problem, of course, is to identify which specific changes have produced the turnout decline. Here, as well, there are two possibilities: socio-demographic changes and attitudinal changes.

The first possibility concerns changes in the life-cycle. We have known for a long time that turnout is higher as one grows older (Wolfinger and Rosenstone 1980). The standard interpretation is that as people get married, have kids, buy a home, and get settled into their community the propensity to vote increases. People become more integrated into their milieu, are more likely to be involved in groups, and they more or less naturally go to the polls when there is an election. This was the case in the 1960s and 1970s and is still the case today (see Goerres 2007). What has changed is that the gap between the young and the old has widened. One reason for this could be that the process of "maturation" takes more time than before. People get married, have kids and buy a house later in life, and so it takes more time for them to be engaged in their milieu. This suggests that we should not be too worried by the recent turnout decline among youth. They will eventually catch up.Footnote 19

There has been very little systematic examination of the "late maturation" hypothesis. Smets (2010) has ascertained the validity of this interpretation in the case of Britain, where turnout has also declined substantially. Her findings suggest that part of the drop in turnout among those below age 30 can be imputed to the fact that they are less likely than before to be married at an early age, to own their home, and to have lived at the same place for a long time. Smets also finds, importantly, that attendance at religious services, political interest, and the strength of partisan identification predict electoral participation. As far as we can tell, no similar study has been performed with Canadian data. This is a promising avenue for further research, particularly in studying the effects of mobility.

A second possibility is that younger cohorts have different perceptions, attitudes and values. Three specific hypotheses have been advanced in the literature. The first is that recent cohorts are less prone to develop feelings of attachment to any of the parties. Because they tend not to identify with any party, they often do not have clear preferences among them, and the incentives to go to vote are therefore weaker. There is some evidence that partisan attachments have declined over time and particularly among younger citizens (Dalton and Wattenberg 2000) and that this has contributed to the turnout decline (Miller and Shanks 1996). We are not aware of any systematic study along those lines in Canada. This is clearly a question that requires further investigation.

Another hypothesis is that younger generations are less likely than previous generations to construe voting as a civic duty. There is some circumstantial evidence supporting that hypothesis. Blais et al. (2004) and Wass (2007) have shown that much of the age gap in turnout can be imputed to a weaker sense of civic duty among youth. Unfortunately, however, we do not have longitudinal data that would allow us to determine whether sense of duty is indeed weaker among today's youth than among those of yesterday.

A further hypothesis is that the changing nature of political information, in both how it is communicated and how it is acquired, is resulting in a generation of citizens who are politically socialized in a manner fundamentally different than previous generations (Milner 2010). When combined with lower "civic literacy," this may lead to lower turnout in the future.

Finally, Dalton (2007) has argued that the younger generation is gradually abandoning electoral politics because it is more interested in more direct forms of political participation, such as demonstrations. There is a kernel of truth in that interpretation, as indeed recent generations are more prone to march in the streets than their predecessors (Dalton 2007). But it is not clear that there is a causal relation between the two trends. As we noted above, those who are engaged in non-electoral political activities are also more inclined to vote (see also Teorell et al. 2007; Verba et al. 1995).

Return to source of Footnote 19 They may not catch up, however, if they form the habit of not voting (Franklin 2004; Plutzer 2002).