In this section, we extend our analysis of youth engagement by turning our attention to the determinants of participation. Our objective is to find out why youth participate less in some forms of political participation than older citizens. We first study the causes of the 20-percentage-point gap in self-reported voter turnout between younger and older adults. Next, we propose a more detailed analysis of youth participation in non-electoral forms of political participation. In particular, we investigate why, when compared to older citizens, youth are less likely to contact politicians. We find that the voting gap between younger and older citizens is primarily due to differences in political attitudes, with inequalities in socioeconomic resources and exposure to mobilising influences playing less of a role. In addition, while Table 1 (above) showed that there are no significant gender differences in rates of political participation, further analyses uncovered a difference in the relationship between parenthood and voting.

From the now-classic formulation by Verba and colleagues (1995, p. 15), citizens tend not to participate in politics either "because they can't, because they don't want to, or because nobody asked." From this perspective, we can identify three key factors that drive political participation: respondents' level of socioeconomic resources, differences in political attitudes, and exposure to mobilising forces. In what follows, we apply a series of logistic regression analyses to assess the extent to which these factors are responsible for differences in participation rates between youth and older citizens before turning, in Section 4, to differences within the former group.

Results from a logistic regression analysis of self-reported voter turnout on respondents' socioeconomic resources, political attitudes, and exposure to mobilising influences are presented in Table 2. We present our findings as average marginal effects (AME), which can be understood as the change in the probability of reported voter turnout if a respondent possesses a given characteristic (e.g., having a child). In cases where variables are scored on a continuous scale (e.g., knowledge and political cynicism), AMEs reflect the change in the probability of voting when respondents' value on the scale increases by one unit.

Our results suggest that individual differences in socioeconomic resources like education and income do not explain differences in self-reported political participation between younger and older adults. In fact, when we control for these differences, the disparity slightly increases when compared to the baseline model including only the categorical variable of whether the respondent is classified as a youth.Footnote 9 Instead, political attitudes – especially political cynicism,Footnote 10 the belief that voting is a civic duty, knowledge and interest in politics in general, and interest in the election in particular, are primary drivers of the discrepancy in self-reported voter turnout between younger and older respondents. After controlling for differences in political attitudes, the disparity in self-reported voting is nearly halved, reduced from 19 to 11 percentage points. Finally, participation is also enhanced by exposure to mobilising forces. For younger and older citizens alike, respondents were more likely to report having voted if they received a voter information card, were contacted by political parties, and were encouraged to vote by their families. Surprisingly, not all types of mobilisation are positively associated with voter turnoutFootnote 11 and, taken together, the role of such mobilising forces is slight, reducing the discrepancy between youth and older citizens by a mere percentage point.

When observing the variation in the marginal effect for being a young Canadian in models 1 to 4, it becomes clear that slightly less than half of the gap in voting between youth and adult citizens is due to differences in attitudes and mobilisation. To further explore the distribution of these factors across older and younger voters, we use the same strategy of "controlled correlation" used by Gélineau (2013, p. 14) in his analysis of the 2011 NYS. Specifically, we regress our dichotomized youth variable on all the factors that were found to exert a statistically significant effect on voting in Model 4. This yields an estimate of the extent to which young citizens are more or less likely to possess a given characteristic. The results displayed in Table 3 reveal that younger citizens are substantially less knowledgeable and interested in politics. Youth also tend to agree less with the idea that voting is a civic duty. Interestingly, when controlling for other influences, youth are not significantly more cynical than their elders.Footnote 12 On the other hand, youth are less likely to recall receiving a voter information card from Elections Canada or to be encouraged to vote by politicians and political parties (though they report a greater likelihood of being encouraged to vote by family members).Footnote 13

It is important to note that the three types of factors studied above do not entirely explain the difference between youth and adult voters. To account for the remaining 10-percentage-point gap, we also tested interactions between youth and all the predictors to see whether the effects of the tested factors are not different on youth and adult voters (e.g., the effect of education could be of different magnitude for youth and adult voters). None of the interactions, however, proved to be statistically significant (analysis not shown in the present report). The difference between self-reported voter turnout between younger and older respondents is thus probably related to a broader set of factors that are difficult to measure and that can be described as experience. This experience may correspond to the process of aging (age effects) or different socialisation processes (generation effects).Footnote 14

Table 1 presented in Section 2 finds no evidence of gender differences in self-reported voter turnout. However, we ran an additional analysis to explore any potential difference in the participation by young men and by young women. In particular, we were interested in the effect of parenthood on voter turnout, as previous research has suggested that the political participation of women may be impeded by motherhood (McGlen, 1980; Quaranta, 2015). To do so, we replicate our full model as shown in Table 2 by including an interaction between children and female (analyses shown in Appendix Table 5). In Table 4, we estimate the interaction effects between gender and being a parent on respondents' self-reported voter turnout. We find evidence to suggest that parenthood has a different effect on voter turnout among young mothers and fathers. For young fathers, the fact of having children has no effect on the probability of self-reported voting. For young mothers, however, having children has a negative and statistically significant effect. In other words, motherhood decreases young women's propensity to vote by 8 per cent. This finding suggests that Elections Canada could tailor interventions toward making it easier for young mothers to vote.

Note: The reference categories for young fathers and young mothers are young men and young women without children, respectively.

3.2 Youth's Involvement in Other Forms of Political Participation 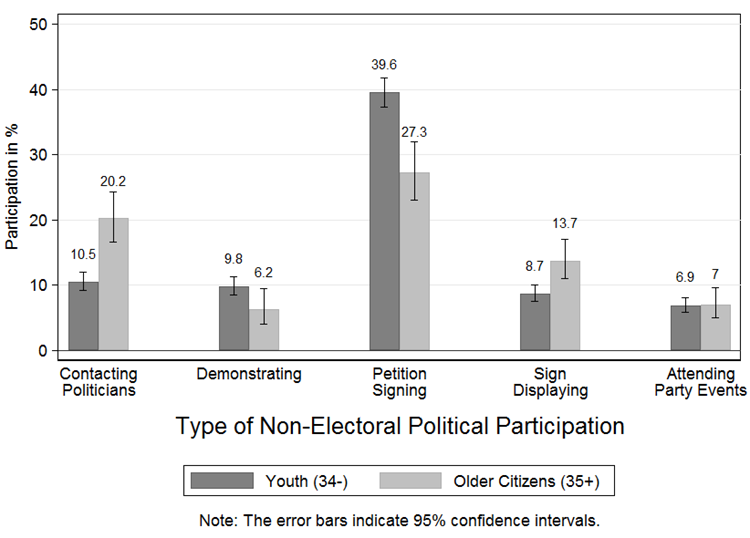 In section 2.1, we found that, in terms of non-electoral political participation, youth participate as much as their elders. However, one may wonder whether this equality holds across all types of political behaviours besides voting. This is explored in Figure 2, where youth and older citizens are compared on each constitutive item of the overall measure of non-electoral political participation. It reveals that there are only two activities in which youth participate less: contacting politicians and, to a much lesser extent, displaying a sign for a party or candidate during an election campaign. At least to some degree, this is compensated by youth's greater propensity to sign petitions and to participate in public demonstrations. Yet contacting politicians is a more personal and direct way of making one's voice heard, and intergenerational equality in this type of citizen engagement is desirable. Consequently, the ensuing analysis explores the causes of youth's lower engagement in this type of activity.

The results presented in Table 5 show a very similar picture to the explanation of youth–adult inequality in voter turnout. The change in the marginal effect of the youth grouping variable in models 6 to 10 suggests that half of the youth's lower propensity to contact politicians can be accounted for by the three classic types of participation drivers. When they are all controlled for (Model 10), the difference falls from 10% (in the baseline Model 6) to 5%. Like in the case of voting, the biggest contribution, a reduction of 3 percentage points in the difference between younger and older Canadians, comes from political attitudes, especially respondents' political interest and knowledge.Footnote 15 Resources and mobilisation play a smaller role, with each accounting for just 1 percentage point in the discrepancy. The unexplained share of the youth–adult gap may be due, as in the case of voter turnout, to age and generation effects.


Return to source of Footnote 9 The difference between youth and older voters is slightly (by 3 percentage points) lower than in Figure 1 (i.e., 17 percentage points instead of 20). This is due to the omission of individuals with missing values on some of the independent variables in the current analysis.

Return to source of Footnote 10 Political cynicism replicates the measure used by Rubenson et al. (2004, p. 39). It is a latent continuous Likert scale, coded from 0 to 1. It consists of the following items: attitudes towards political parties (variables QF4 and QF2B in the NYS 2015), politicians (QF3), and the government (Q2FC). Formal tests showed that the scale is unidimensional and reliable (Cronbach's alpha = 0.77). Citizens who score high on the scale typically dislike political parties and politicians, and agree strongly with the statements that all federal political parties are the same and that the government does not care about people.

Return to source of Footnote 11 Those who declare having been encouraged to vote by the news media show a lower propensity to vote, by 6%. This result is, however, not very robust and should be taken with a pinch of salt, since in a simple bivariate analysis (without the inclusion of other predictors) the effect of media mobilisation is positive (+ 8.2) and statistically significant (p<0.001).

Return to source of Footnote 12 However, in a bivariate setting, youth are more cynical. The average value of young citizens on the 0–1 cynicism scale is 0.45 and that of their older counterparts is 0.41 (p value of the difference < 0.001).

Return to source of Footnote 13 According to our model, the media mobilisation, which is slightly stronger among youth, exerts a negative effect. Yet, as we mentioned earlier, this result should be interpreted with caution (see footnote 11).

Return to source of Footnote 14 The current survey does not allow us to explore the role of these factors at depth. However, when we attentively add controls for age effects in Model 4 (see Appendix Table 6), the AME of the youth dummy decreases to 5 percentage points. This suggests that age effects may account for 50% of the unexplained youth–adult difference in Model 4 in Table 2), and up to 50% may be due to generation effects. Such an estimate is relatively consistent with the findings with earlier studies from Canada (e.g., Blais et al., 2004). Of course, this should be further explored with a much more sophisticated analysis employing representative data from a large number of federal elections. It should be also noted that some of the differences between youth and older citizens that we observe in attitudes (notably political interest and civic duty) are also likely to be generational in nature.

Return to source of Footnote 15 It should be noted that the positive effect of political cynicism on contacting politicians in Model 10 might reflect a potentially spurious relationship; in a bivariate setting, the coefficient becomes negative and statistically insignificant.