The literature provides evidence that citizens' interactions with their social and political environment can affect their willingness to be politically active. Firstly, involvement in community associations and social groups helps citizens develop civic skills and a feeling of community, and may facilitate political action (Putnam 2000). Secondly, citizens' involvement in a variety of political actions may increase their likelihood of participating in the elections as well (Verba et al. 1995). Finally, citizens' use of social programs and interactions with governmental offices represent meaningful political experiences, which can affect citizens' willingness to vote (Soss 1999, Mettler and Stonecash 2008, Sharp 2009). In this section, we focus on social engagement, political participation, and contacts with the government. Social engagement is measured by asking respondents if they had volunteered for any organizations in the past year.Footnote 13 Political participation is measured by the level of involvement in 14 acts of political participation.Footnote 14 And finally, respondents were asked if they had contacted or visited a government office in the past year (such as a Service Canada office or a provincial government office).Footnote 15 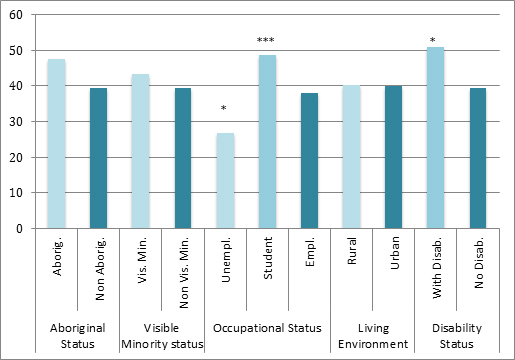 Note: Canadian youth aged 18 to 34. Statistical significance of the difference: