Official Voting Results Following the May 24, 2005 By-election Held in Labrador

This section of the Chief Electoral Officer's report on the federal by-election held May 24, 2005, describes the circumstances leading to the call for a by-election, the electoral district involved, the candidates, the numbers of registered electors and polling stations, and the results.

The following section presents further information and summary data on the official voting results, in the form of tables. The concluding section gives the poll-by-poll results for the by-election.

Information on the administration of the May 24, 2005, by-election and any other by-election that may take place in 2005 will appear in a report to be published in March 2006:

The report will be available at www.elections.ca.

On December 16, 2004, Lawrence David O'Brien, the Liberal Party of Canada Member of Parliament for Labrador since March 25, 1996, passed away, leaving his seat in the House of Commons vacant. A writ ordering a by-election in Labrador was accordingly issued on April 17, 2005.

The boundaries of the electoral district of Labrador were the same as those in effect during the 2004 federal general election. They coincide with the boundaries defined in the Representation Order of 2003, issued in accordance with the Electoral Boundaries Readjustment Act.

Labrador (Newfoundland and Labrador)
Population based on the 2001 Census: 27,864 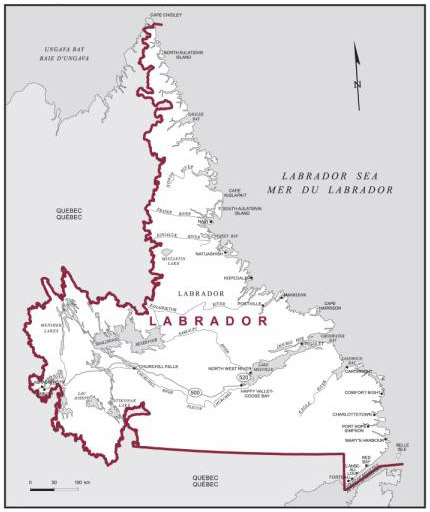 There were 19,571 names on the preliminary lists of electors for the May 24, 2005, by-election. The lists were produced from information in the National Register of Electors. During the revision period, which extended from April 20 until May 17, 2005, 728 electors were registered, including those who were already on the lists but had their address changed.

The names recorded on the final lists of electors (that is, the lists prepared after election day) numbered 19,876.

These lists included the names of 755 electors who registered on election day, some of whom had their address changed.

The returning officer set up 66 ordinary polling stations, 65 of which were stationary.

In the May 24, 2005, by-election in Labrador, the Liberal Party of Canada candidate, Todd Norman Russell, was declared elected once the validation of results was completed.

Following the by-election of May 24, 2005, the distribution of seats in the House of Commons was:

The Chief Electoral Officer may adapt the Canada Elections Act under subsections 17(1) and 178(2). During the 2005 Labrador by-election, he used these authorities on two occasions.

On election night, it was noted that the transmission of the preliminary poll-by-poll results could have jeopardized the secrecy of the vote for certain advance polling stations. Therefore, in order to preserve the secrecy of the vote, subsection 168(4) of the Canada Elections Act was adapted to allow the returning officer to combine the results of two or more advance polling districts.