1. Context: Toward the 42nd General Election

Experience shows that elections do not close with polling day; a full portrait of their successes and shortcomings can take time to emerge. After the 2011 election, standard activities such as judicial recounts and the auditing of political entities' financial returns took place. There was also an in-depth investigation into deceptive telecommunications and a contested election that led to an independent review of poll workers' compliance with voting procedures.

The Chief Electoral Officer submitted three reports to Parliament following the 2011 election that guided preparations for 2015:

A number of environmental factors influenced the agency's planning for the 42nd general election – most notably, a rapidly evolving legislative framework and pressure from Canadians to provide more flexible services. The main factors that influenced planning and administration are described below. Further details are in section 2 of this report.

Elections Canada delivered four general elections within an eight-year period (from 2004 to 2011). Although the agency implemented some service improvements over that time, its efforts were mainly focused on being ready to conduct a general election.

The election of a majority government in 2011 and a fixed date of October 2015 for the next general election provided Elections Canada with more opportunity to improve election services and its communications campaign, engage a wider variety of stakeholders as it designed changes, develop a new training approach for election workers, and invest in information technology infrastructure and security for the 2015 election and beyond.

Since the 2011 election, significant amendments to the Canada Elections Act, as well as many other proposed amendments, required the agency's attention.

Bill C-23, which was adopted on June 19, 2014, made several key changes that needed to be implemented for the general election, including:

As a consequence, among other tasks, the agency revamped its entire suite of election worker forms, guidebooks, manuals and training materials. It also rewrote its suite of political financing manuals for political entities and modified its reporting forms and software to adjust to the new rules. It realigned some of its priorities for administrative improvements starting in the winter of 2014 to focus on implementing the new provisions. In line with legislative direction, the agency cancelled its plans to allow electors to use their voter information card to prove their address. It also set aside its recommendations on a broader review of compliance and enforcement measures under the Canada Elections Act.

Two constitutional challenges in the lead-up to the election caused some uncertainty about the applicable rules for voters.

In May 2014, the Ontario Superior Court of Justice struck down the provisions of the Canada Elections Act that prohibited Canadians living abroad for more than five years or not intending to return to Canada to reside from voting by special ballot. As a result of the decision and in the absence of a stay, Elections Canada adjusted its information materials and forms, stopped requiring a declaration of the electors' intent to return to reside in Canada and approved applications from Canadians who had been living outside the country for more than five years in the International Register of Electors. However, on July 20, 2015, the Ontario Court of Appeal reversed the lower court decision, reinstating the previous rules. These changes impacted Canadians living abroad and election workers alike, requiring Elections Canada to communicate with affected electors and respond to more enquiries.

A separate court case involved a constitutional challenge to amendments to the Canada Elections Act introduced by Bill C-23, including voter identification requirements. As part of this challenge, in July 2015, the Council of Canadians filed an injunction to prevent the application of one provision in particular, prohibiting the Chief Electoral Officer from authorizing the voter information card as a form of identification on election day. The application for an injunction was dismissed on July 17 and leave to appeal was dismissed on August 5, three days after the issue of the writs. As a result, the voter information card was not authorized as a piece of identification for the 42nd general election. Nevertheless, the possibility of an injunction being granted required the agency to develop last-minute contingency plans for a revised voter information card, communications material and poll worker instructions to allow for its use.

After the 2011 general election, allegations of fraudulent robocalls as well as administrative irregularities at the polls in Etobicoke Centre (Ontario) highlighted election integrity issues.

In response to the robocalls incident, the agency submitted a report to Parliament examining preventive, compliance and enforcement measures that could be taken to deal with deceptive communications and recommended legislative changes. It commissioned an independent review of election officers' non-compliance with procedures at the polls and published the resulting report, which included the reviewer's recommendations and the agency's action plan. Administrative measures to safeguard integrity for the 2015 election became a high priority.

The agency also set up an office to improve compliance with voting procedures and respond to incidents that could jeopardize the integrity of the election or Canadians' access to voting. Some changes were made at polling places to achieve a more efficient workflow, relieve pressure on poll workers and improve procedural compliance. Central poll supervisors, hired in greater numbers, became responsible for monitoring the process at their polling place. More registration officers were also hired to reduce pressure on the deputy returning officers and to minimize record-keeping errors. All forms and manuals for poll workers were redesigned, training modules were modernized and election officers were sensitized to the importance of being diligent in their work.

As required by legislative changes, the agency laid the groundwork for an independent audit of poll worker performance. It consulted internal and external auditors, parliamentarians and political parties to prepare the audit terms before holding a competitive procurement process. The audit will report on whether a sample of poll workers properly exercised their powers and functions at polling places, and on the degree to which controls such as manuals and training helped with compliance. The audit's conclusions, along with the agency's response, will be discussed in Elections Canada's retrospective report.

During the period of successive minority governments from 2004 to 2011, Elections Canada did not introduce major technological changes.

After 2011, in response to Canadians' needs for modern and more convenient election services, the agency invested in its information technology infrastructure and made some investments in modernizing its systems. By early 2015, Elections Canada had implemented a number of upgrades and changes to benefit electors and field workers. The technology allowed for improved online services and streamed election night results. It also enabled local offices to update the central voters list electronically.

To make this possible, the capacity of the agency's data centres was expanded to support new systems and anticipated increases in transaction volumes. Additional measures were taken to improve information technology security. New agreements were established with solution and service providers to supply field offices with equipment and telecommunications services. Quality assurance was managed through extensive testing and simulation exercises at headquarters and select field offices.

Leading up to the election, Elections Canada worked closely with its stakeholders so that changes made to procedures at the polls would meet the needs of electors and political participants.

The agency worked with organizations representing its outreach target groupsFootnote 1 as it made accessibility improvements and redesigned its communications and outreach campaign. It also worked with the following advisory groups on administrative improvements, challenges in implementing the recent legislation and general preparations for the election:

Increasingly, Canadians expect more accessible and convenient election services that take advantage of technology and self-service options. Bringing the electoral system into the 21st century is crucial. At the same time, what it means for an election to be accessible is different for everyone. To ensure that all Canadians have an equal opportunity to vote, Elections Canada must understand their expectations and offer services that meet their diverse needs. 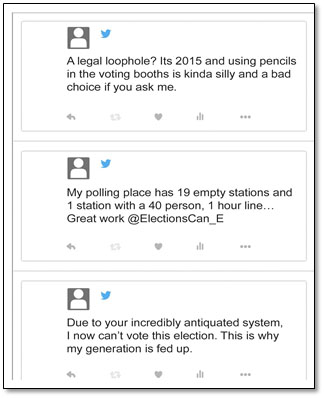 For the 42nd general election, the agency made administrative changes to offer more convenient services. These included an online voter registration service, an online form for applying to vote by special ballot, web forms for enquiries and complaints, registration and voting opportunities on campuses and at other locations, and a multimedia communications and outreach campaign with a full suite of digital products and social media accounts to provide real-time digital information.

The agency views accessibility as an ongoing and long-term process to provide inclusive, universal and flexible services that benefit everyone. Much of its efforts in recent years have focused on reducing barriers for people with disabilities. Working with the disability community, Elections Canada set new accessibility criteria for polling places, developed its voter information products in more accessible formats, and trained election workers to assist electors with varying abilities.

Service in both official languages is another key expectation. In response to a report from the Commissioner of Official Languages, Elections Canada took extra steps to offer bilingual services in local offices and polling places. As part of election worker recruitment, returning officers contacted official-language minority organizations in their electoral district to seek applicants. If too few bilingual workers were found, returning officers pinpointed neighbourhoods with higher numbers of minority-language speakers so they could assign these workers where they were most needed.

Return to source of Footnote 1 For the 42nd general election, outreach target groups were Aboriginal electors, electors with disabilities, electors from ethnocultural groups, electors who are homeless, seniors living in long-term care facilities, youth and students.