5. Working with Candidates, Political Parties, and Third Parties – Report on the 43rd General Election of October 21, 2019

The Canada Elections Act includes many provisions and requirements for candidates, political parties, and third parties to follow.

The agency communicates with these groups, by providing information sessions and handbooks, to ensure that they understand and are equipped to comply with the rules. For this election the agency also introduced the online portal, with the goal of serving candidates and parties more efficiently and effectively.

The Canada Elections Act now includes a pre-election period with spending limits for third parties and registered parties. The period starts on June 30 in the year of a fixed-date general election and ends on the day before the election period begins. In 2019, the spending limit for partisan advertising by political parties was $2.05 million; the limit for all regulated activities of third parties was $1.02 million.

Under the new legislation, more third-party activities are regulated. It is no longer just election advertising in the election period that is covered under the Act, but also partisan advertising in the pre-election period, partisan activities, and election surveys. An important feature of the new legislation is the increased transparency for third-party activities. The new rules required third parties to submit up to four interim financial returns once they reached $10,000 in contributions or expenses for regulated activities since the previous general election, in addition to a final campaign return.

Third parties represent a diverse collection of individuals, groups and corporations that want to participate in the democratic process but do not seek election themselves. They are not usually known to Elections Canada before they register. As a result, any outreach activity is particularly challenging.

Elections Canada prepared and disseminated, through its website and social media accounts, several new tools to raise awareness and assist third parties in the application of the new rules, given the extensive changes. These included frequent information sessions, a roadmap for the pre-election and election periods, several videos, and a handbook. The agency reached out to previously registered third parties in federal, provincial, and territorial elections to provide the information that was available and proactively informed potential third parties through a social media campaign. Elections Canada also organized online conferencing sessions to inform third parties of the new rules. Third parties could also contact Elections Canada directly with their questions. 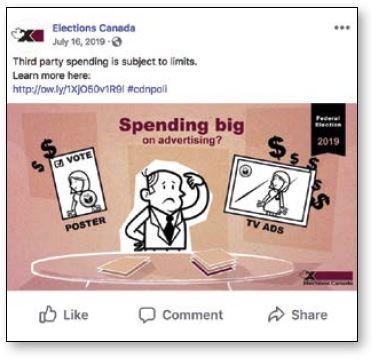 Despite the outreach efforts, some confusion remained on third-party obligations, particularly in the context of advertising about climate change during the election period. The Chief Electoral Officer issued a statement on August 20, 2019, to clarify third-party requirements on issue advertising and invited third parties to contact Elections Canada with their questions.

The Canada Elections Act sets separate limits on the election expenses of candidates and registered political parties. The election expenses limit for candidates is based on several factors, including the number of names appearing on either the preliminary or revised lists of electors for an electoral district. These limits are adjusted for inflation.

Table 6 in the Appendix lists each party's number of confirmed candidates and final expenses limits.

The system governing expenses for nomination contestants and candidates changed as well for this general election. There are new categories and subcategories of personal expenses, travel and living expenses, and litigation expenses. For candidates, certain personal expenses are now reimbursed at higher rates. There is also a new category of accessibility expenses for registered parties and candidates, aimed at improving access for persons with disabilities to campaign events, work, and information. Accessibility expenses do not count as election expenses and are reimbursed at 90 percent, up to a limit.

To ease the regulatory and financial burden, candidates and registered electoral district associations now require an audit only if they reach a threshold of $10,000 in contributions or expenses, or (for candidates only) 10 percent of valid votes cast. There is now an audit subsidy for nomination contestants, and the audit subsidies payable to electoral district associations, nomination contestants and candidates are now tied to inflation. Moreover, independent candidates who had to remit surplus funds to the Receiver General after an election can apply to have the funds repaid if they run again in the subsequent election held in their electoral district.

Bill C-76 amended the Canada Elections Act to require each political party to adopt a policy for the protection of personal information and to publish the policy on its website. These provisions were brought into force by the Chief Electoral Officer on April 1, 2019.

The Act details six requirements that must be addressed in the policy. Broadly speaking, parties must indicate:

As of the publication of this report, all registered parties have provided a compliant policy for the protection of personal information. Links to the various policies can be found at elections.ca, under Political Participants > List of Political Parties. Analysis of this new requirement and the policies will be provided in the retrospective report.

After the election, Elections Canada undertakes the audit of campaign returns for candidates, political parties and third parties. Candidates and third parties have until February 21, 2020, to file their returns; the deadline for parties is June 22, 2020. Files will be selected for an audit on the basis of risk criteria. Elections Canada is aiming to complete the audit of candidate returns within 12 months after the filing deadline, in comparison to an 18 month target in 2015 with fewer candidates

The agency launched its online portal nationally for the 43rd general election. This secure online portal offered political entities and prospective candidates an alternative way to access electoral products and submit candidate nominations electronically. Of the total 2,146 confirmed candidates, 183 resulted from e-nominations. The portal also allowed for distribution of 85 different electoral products. By far the most popular product downloaded was sequence number sheets, commonly known as bingo sheets, a tool that indicates to candidates which electors have already voted, allowing campaigns to better focus their get-out-the-vote activities. 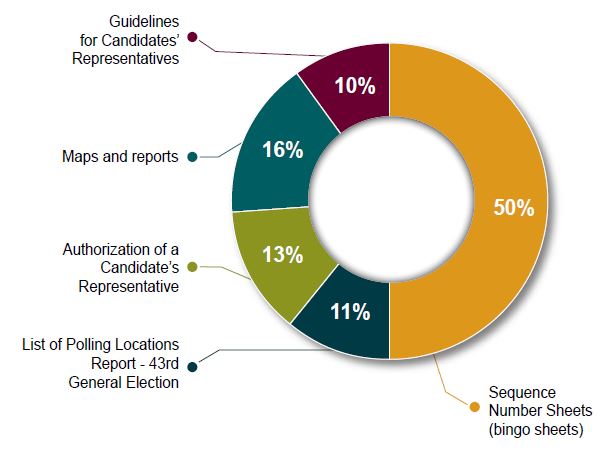 Text version of "Most popular downloads from the online portal"

Resources and information sessions for candidates and campaigns

Returning officers met with confirmed candidates or their representatives between October 2 and 4. Some of the most common topics discussed were polling place hours, election worker recruitment, revision of the lists of electors, access to the online portal, procedures for advance voting and voter registration, polling locations, and guidelines for candidates and their representatives at the polls.

Elections Canada also provided candidates with updated electronic filing software that could be used to issue contribution receipts and prepare an electoral campaign return. The software update was available through the online portal.

After the election, 434 campaign representatives attended Closing the Campaign sessions that Elections Canada staff held from November 7 to December 7 in 21 cities. Topics included electoral campaign financing, completing the reporting requirements with the electronic filing software, filing deadlines, and closing the campaign. Combined with the attendees of the Getting Started sessions, 995 individuals participated, compared with 785 for the 42nd general election.

Changes to the Canada Elections Act in Bill C-76 included provisions to support accessibility expenses incurred by political parties and candidates, as well as disability expenses for candidates. Elections Canada prepared an Accessibility Info Sheet for Political Parties and Candidates as a way of promoting an accessible and inclusive electoral system. This document had been suggested by persons with disabilities who sought to ensure that parties' campaign materials and other information would be accessible to all electors. The info sheet describes the importance of accessibility and the barriers that many people face, how political entities can make their activities more accessible, and a list of information resources. Elections Canada also published an interpretation note on accessibility expenses and disability-related personal expenses (see "Official guidance and interpretation" below). The agency will not know the full extent of these expenses until it receives and analyzes all campaign returns. An analysis will be provided in the retrospective report.

Elections Canada issues written opinions, guidelines and interpretation notes to political parties on the application of the Canada Elections Act. This is a legislated process involving prescribed consultation with political parties and the Office of the Commissioner of Canada Elections. Eight of these were finalized for the 43rd general election, on topics such as accessibility expenses and disability-related personal expenses, volunteer labour, and guidelines for candidates' representatives. Elections Canada also issued new versions of the handbooks for nomination contestants, candidates, registered parties, and electoral district associations to reflect the legislative changes brought about through the passage of Bill C-76. 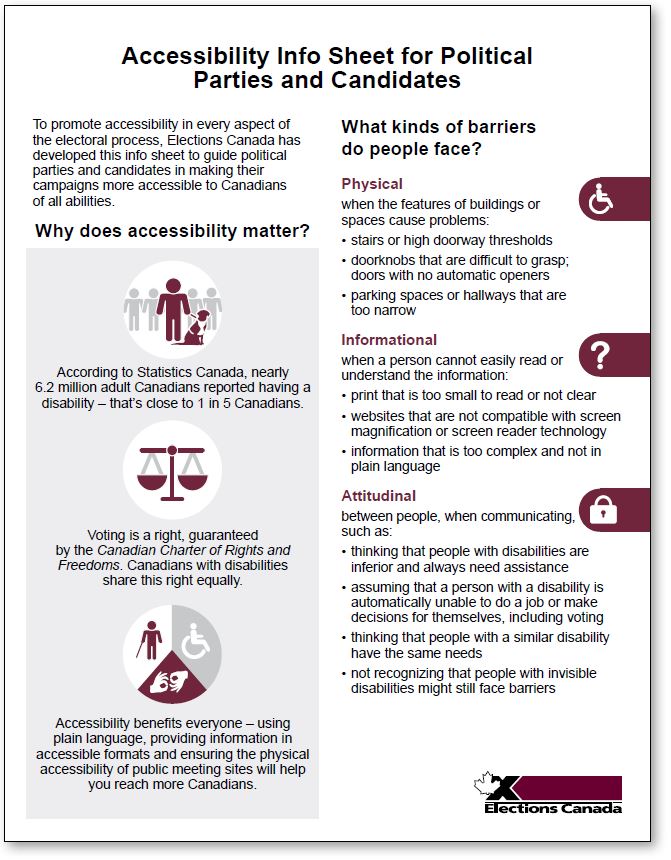 Text version of "Guide provided to parties and candidates"

During a general election, the Canada Elections Act requires every broadcaster in Canada to make at least 390 minutes of broadcasting time available for purchase by registered and eligible parties. The time must be provided during prime time at the lowest rate that would be charged to any other purchaser for equivalent time.

On June 28, 2019, the Broadcasting Arbitrator issued his latest order on the allocation of paid broadcasting time. This allocation was in effect for the 43rd general election.

Table 7 in the Appendix details the paid and free broadcasting time that broadcasters and network operators were required to provide to parties during the 43rd general election.