Report of the Chief Electoral Officer of Canada – Following the Pilot Project on the Use of an Assistive Voting Device in the November 29, 2010, By-election Held in Winnipeg North

2. Description of the Assistive
Voting Device Used in
Winnipeg North

An AVD is a piece of electronic equipment that allows an elector with a visual impairment or limited dexterity to mark a ballot independently and in secrecy.

Such devices have been used in provincial and municipal elections in Canada. Table 2 provides details of the use of AVDs by other Canadian jurisdictions, as called for by the Senate committee in its recommendations.

Where vote counting is automated, AVDs have been used in conjunction with a vote tabulator. Since vote counting in federal elections is manual, Elections Canada has been interested in the devices for the sole purpose of offering an additional service to electors with disabilities – one that would enable them to vote independently and in secrecy.

Through a competitive procurement process, Elections Canada selected Dominion Voting Systems to supply AVDs on a rental basis for the Winnipeg North by-election. The supplier had to meet three primary requirements:

The device used in the Winnipeg North by-election provided the following accessibility features, making it suitable for electors with visual impairments or limited dexterity:

The AVD had an audio and/or visual review function that allowed electors to confirm their choice of candidate before printing the ballot. It was also compatible with cochlear implants.

To cast a ballot using the AVD, electors first selected the language and accessibility features they wanted to use. The device provided visual and/or audio instructions.

In response to the Senate committee's recommendation, Elections Canada ensured that the vocabulary employed in the device's audio program was as simple and straightforward as possible.

A printer attached to the AVD marked a regular ballot, which was then placed in the ballot box. The device did not store information or count votes.

At the close of polls, officials followed Elections Canada's usual process to count ballots. Ballots marked by the device were indistinguishable from those marked by hand. 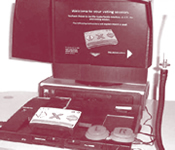