Canada's Constitution requires that federal electoral districts be reviewed after each decennial census and adjusted (or redistributed) to reflect changes and movements in Canada's population. The Electoral Boundaries Readjustment Act establishes the roles and responsibilities, the process, and the criteria for redistribution.

Role of the commissions

Ten independent electoral boundaries commissions – one in each province – are established to revise the electoral district boundaries in their province. Each commission is composed of three members. It is chaired by a judge appointed by the chief justice of the province, and has two other members appointed by the Speaker of the House of Commons.

Each commission works independently to:

Role of the Chief Electoral Officer

Redistribution process at a glance

This section of the report presents the major steps in the redistribution process.

1. Allocation of seats in the House of Commons

The number of House of Commons seats given to each province and territory is recalculated on the basis of population estimates derived from the most recent census and through a formula in the Constitution. When the 2012 redistribution comes into force, there will be 338 seats in the House of Commons, allocated as follows:

After creating a proposal for a province's electoral map, the commission publishes this proposal in the Canada Gazette and on its website, and advertises it in newspapers. At the same time, it invites Canadians to present their comments and opinions at public hearings.

3. Input from the public

The public hearings provide opportunities for the public to participate in the process of redrawing the electoral map. Hearings are usually held at several locations across provinces. Anyone wishing to present ideas must inform the commission in writing within 23 days after the commission has published its proposal.

After considering the views of the public, each commission submits a report of its proposed electoral map to the House of Commons. A committee of the House studies the proposed map in light of objections it receives from MPs. The results of their deliberations, along with the objections, are provided to the commission.

Any commission that receives such objections must then review and decide on them (or "dispose of them," to use the language in the Act) and may amend its report accordingly. Final reports are then submitted to the Chief Electoral Officer, who transmits them to the Speaker of the House of Commons for tabling in Parliament, or for publication in the Canada Gazette if received by the Speaker during an interval between two sessions of Parliament.

The Chief Electoral Officer prepares a draft representation order, which sets out all the electoral boundaries in accordance with the recommendations contained in the commissions' reports, the names of the electoral districts, and their populations. The Governor in Council declares by proclamation the representation order to be in force on the first dissolution of Parliament that occurs at least seven months after the day on which the proclamation was issued. This allows political parties, candidates and Elections Canada time to get ready for an election based on the new electoral districts.

Each redistribution exercise is unique: in the decade-long intervals between them, the demographic character of Canada can change, which may affect future representation in the House of Commons. However, legislative change can also affect the process, while technological change can improve services and affect participants' expectations.

The Fair Representation Act, adopted in 2011, introduced the "representation rule," which altered the formula for the calculation of the number of seats in the House of Commons. It also amended the redistribution calendar considerably:

Three provincial redistributions also coincided with the 2012 federal electoral boundaries redistribution. In those provinces, federal commissions had to address possible confusion in the public mind between the redistributions at two levels of government.

Though Elections Canada had been preparing well in advance, the official launch of the federal redistribution process began in February 2012 with the reception by the Chief Electoral Officer of the census population numbers and with the establishment of the commissions. It closed with the proclamation of the representation order in October 2013. The new electoral districts will be applied in the first general election called after May 1, 2014.

Highlights of the calendar 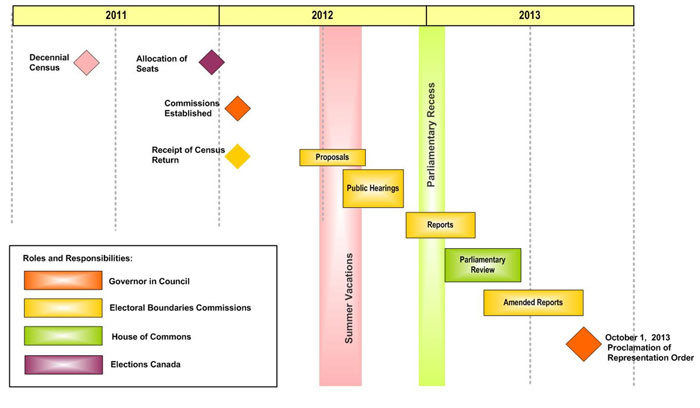 Highlights of the calendar – Text version

The Chief Electoral Officer provides four kinds of support to the commissions, delivered through Elections Canada:

The Chief Electoral Officer also acts as a liaison between the commissions and Parliament.

Within these parameters, Elections Canada has considerable autonomy in determining what form this support will take. It draws best practices from the previous redistribution and adapts the support it will offer to stakeholders and, in particular, to the commissions.

In the 2012 redistribution, Elections Canada used many of the same support tools as it did in the previous exercise. There were, however, several refinements as well as responses to technological change:

Most of these support services were modelled reasonably closely on those of the previous redistribution, which makes comparison of costs possible (as detailed under key success factor 5, below).