A third party must register when it conducts regulated activities with combined expenses totalling $500 or more. The following individuals and groups can become a registered third party:

In the 2019 election, the overall number of third parties rose again, increasing by nearly a third to 151. Most continued to be in Ontario (57%). Several new provinces were represented in this election: Manitoba, New Brunswick, Prince Edward Island and Newfoundland and Labrador. The territories were not represented in all three general elections.

While third parties register in one province or territory as their headquarters, they can operate across the country. The fact that many national organizations are based in Ottawa and Toronto may explain Ontario's predominance in the list below.

*In the handful of cases where no third party address was reported on the registration form, the financial agent's address was used as the location. "Other" refers to a third party that was located abroad.

A third party registers with Elections Canada as an individual, a corporation, a group without a governing body, or a trade union or group with a governing body. These types are distinguished in the law. However, to better describe who is participating, this report presents third party data under the following types:

Overall, corporations were the most common type of registered third party. They were also the type whose number grew most significantly from 2011 to 2019, increasing by over 800%. Corporations also accounted for most of the growth in the number of third parties between the 2015 and 2019 elections. Registered charities had the lowest number of registrants among the third party types at each election. 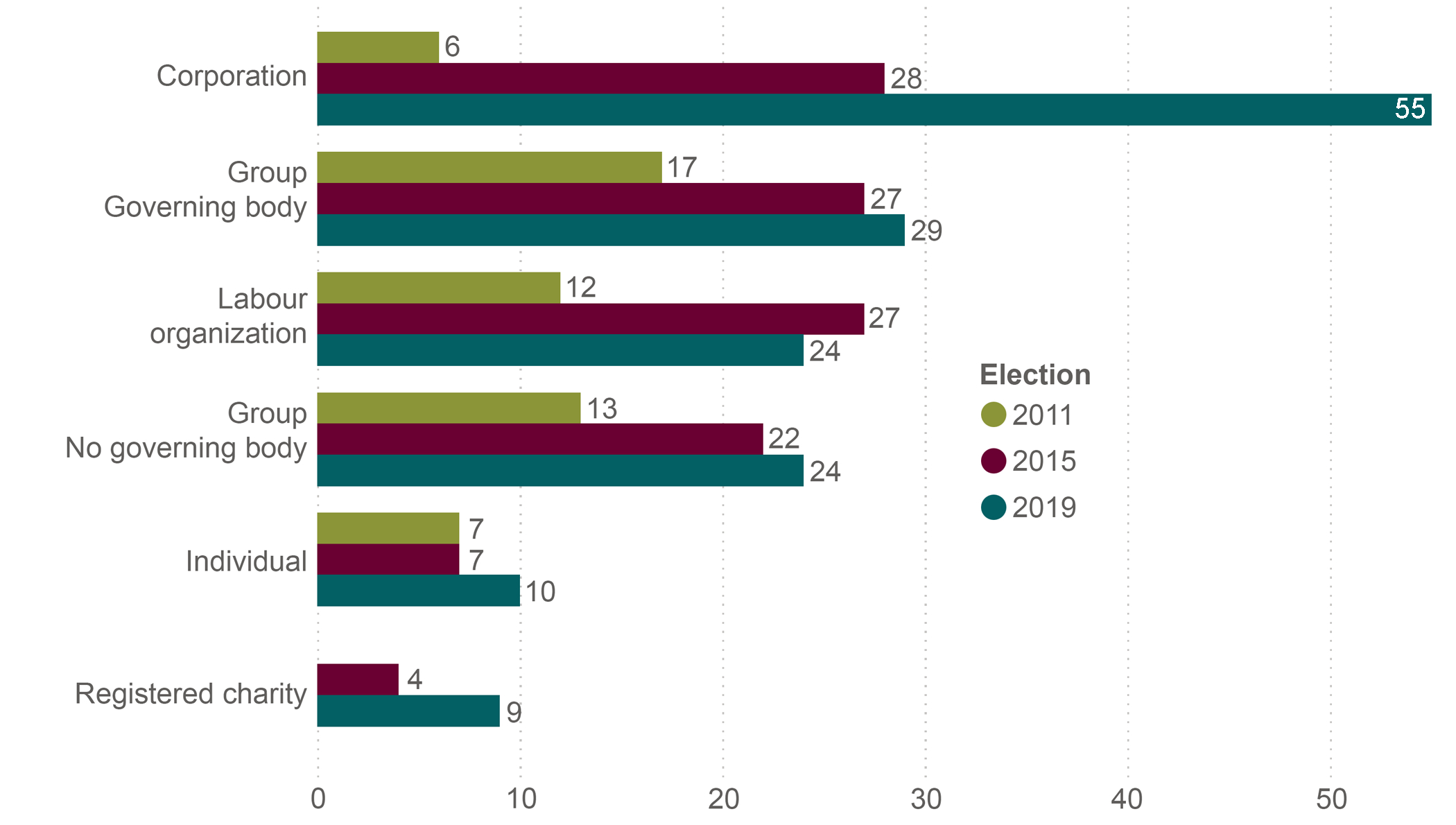 Partisan activities are activities carried out by a third party that promote or oppose a political party, nomination contestant, potential candidate, candidate or party leader, other than by taking a position on an issue with which the political party or person is associated. Any activity may qualify such as making telephone calls, sending text messages, creating organic social media content or a campaign website, canvassing door to door and holding get-out-the-vote activities. This includes activities directed at a third party's own members, employees or shareholders.

Partisan advertising is the transmission to the public by any means during a pre-election period of an advertising message that promotes or opposes a political party, nomination contestant, candidate or party leader, other than by taking a position on an issue with which the party or person is associated.

2.4. Key findings from this chapter

Return to source of footnote 1 The third party can register as long as its primary purpose in Canada is not to influence electors to vote or refrain from voting, either in general or for a particular registered party or candidate.

Return to source of footnote 2 Data on third party types are reported as declared by the third parties, except in the case of labour organizations and registered charities, which were identified using federal data (Labour organizations in Canada and List of Charities) and individual websites.