This quarterly report addresses the financial reporting requirements of both Elections Canada (EC) and the Commissioner of Canada Elections (CCE), referred to hereafter as the Office of the Chief Electoral Officer (OCEO). For more information, see the Significant changes in relation to operations, personnel and programs section.

A summary description of the agency's programs can be found at http://www.elections.ca/content.aspx?section=res&dir=rep/rpp/dp2019&document=p2⟨=e.

During the first quarter of 20192020, the agency conducted a by-election in NanaimoLadysmith (British Columbia) and focused on its preparatory activities for the 2019 general election. 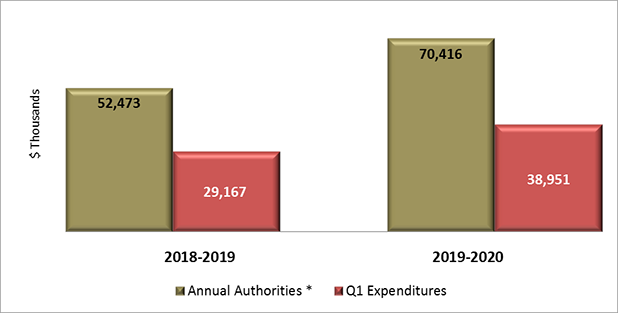 The OCEO is continually updating its corporate risk framework and monitoring the risk environment. The OCEO has identified electoral integrity and security issues, specifically during the general election, as the key risks to delivering on its mandate in 20192020. These risks may compromise the privacy of Canadians and their trust and ability to participate in the electoral process. The agency has undertaken actions to mitigate these potential risks.

Bill C-76, which received royal assent on December 13, 2018, brought significant changes to the OCEO's mandate and operations. Notably, effective April 1, 2019, the Commissioner of Canada Elections (CCE), the independent officer whose duty is to ensure that the Canada Elections Act and the Referendum Act are complied with and enforced, has been transferred from the Office of the Director of Public Prosecutions to the OCEO. A quarter of the CCE's appropriation has been transferred to the OCEO, with the remainder to be transferred via Supplementary Estimates. All other expenditures of the CCE are reflected in Electoral expenditures (see Table A.1), which also includes expenditures of Elections Canada. The current CCE is Mr. Yves Côté.

Table A.1
Office of the Chief Electoral Officer
Quarterly financial report
For the quarter ended June 30, 2019

More information is available in Table A.2

Footnote 2 Program expenditures is an annual appropriation that funds the salaries of Office of the Chief Electoral Officer's indeterminate employees.

Footnote 3 Under the Statutory authority, Electoral expenditures funds the operating expenditures of the agency and those incurred in preparing and conducting elections, reimbursing election expenses to eligible candidates and parties, and monitoring compliance of the Canada Elections Act.

Table A.2
Office of the Chief Electoral Officer
Quarterly financial report
For the quarter ended June 30, 2019

Footnote 1 Statutory expenditures in the "Planned expenditures for the year ending March 31, 201x" columns reflect first quarter expenditures only, since statutory authorities are granted as expenditures are incurred.